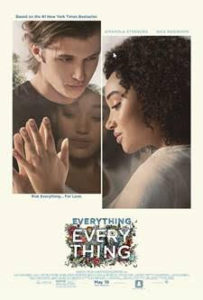 “Everything, Everything” is going to draw a lot of on the surface comparisons to John Travolta’s “The Boy in the Plastic Bubble” and Jake Gyllenhaal’s “Bubble Boy.” It’s fair and unfair at the same time to make that comparison. It’s true that all three movies are about an individual, who’s basically allergic to life, overcoming the odds. But “Everything, Everything” is a lot more heartfelt and genuine, instead of cheapening its main character’s journey with low-brow humor or made-for-TV melodrama.

Maddy (Stenberg) suffers from severe combined immunodeficiency (SCID). Instead of a stereotypical bubble, her life is confinement inside her mother’s airtight home. Pauline (Rose) is a doctor that keeps constant watch and care over her daughter. Maddy seems defeated with the possibility that she’ll ever be able to explore the outside world. She limits her exploration to books she reads, online group chats with other kids who suffer from SCID and busying herself with architecture designs for an online course. Maddy’s wanderlust is sparked by a new neighbor, a loner, and uncharacteristically handsome boy, Olly (Robinson).

“Everything, Everything” is smart for recognizing that teen conversations no longer come in the form of passed notes, lengthy late night phone calls or basic interpersonal dialogue. The two connect over text and Internet, but “Everything, Everything” packages these heart-to-hearts cleverly. The movie plays out the conversation like they’re talking face-to-face, but in the realm of Maddy’s mind and in the playground of one of her architecture models. When the two finally do meet, they awkwardly communicate for the first time using words from their mouths and not with their thumbs.

The film’s sweetness is never overbearing and the cute relationship that developments is wholesome, while still maintaining a foot in reality. Maddy begins to yearn for life outside her sterile home while Olly is discovering there is hope in his miserable life. We subtly learn that his father is abusive, and that his mom, sister and he are emotional prisoners. Maddy and Olly find solace in each other. But alas, there’s a problem with the movie. It lacks courage.

The final act of this movie nearly sinks all the film’s good intention. For obvious reasons, I can’t talk about the ending, but I admit to being ignorant to the twist because I was expecting a unique ending, specific to the movie I was watching unfold. While the ending may have worked for the book this movie is based on, it doesn’t work in the movie. There was a decent shot at making “Everything, Everything” another “Fault in Our Stars” story, but the writers, of both the book and movie, lack the grit to deliver upon their character’s initial moxie.

Despite its flawed, cop-out ending, “Everything, Everything” finds it’s sensibilities in the relationship that develops between the leads. It’s faithful to their emotions, as well as their flawed humanity, although it’s a bit peculiar watching teenagers talking and acting so sincere without an underlying sense of dishonesty. Sometimes logic be damned when two teens are in love, or in this case, when the script calls for it.