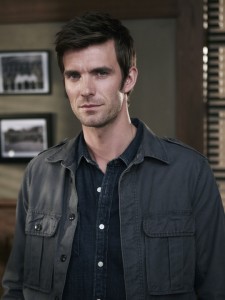 Lucas Bryant is known best for playing Nathan on Syfy’s “Haven”. The show is starting its third season on September 21st, 2012. The show originally spawned from Stephen King’s novella “The Colorodo King”, but has developed its own legs, especially in this new season. Media Mikes had a chance to chat with Lucas about what we can expect from this season and how it differs.

Mike Gencarelli: How do you feel that Nathan has evolved now going into the show’s third season?
Lucas Bryant: Thinking about Nathan over these three seasons, his story is similar to a coming-of-age story. Initially he was in denial about who he was, what was going on in town and what he part was going to be. In the second season, they leaned more towards what part he was going to play and accept what is going on. In the third season, you get to see him being more decisive, active and making decisions, which seems a little out of character for him. By the end of the season, the reasons for his actions become clear. It has been a real journey for him to find himself.

MG: What can we expect from the organization known as “The Guard” this season?
LB: Yeah, “The Guard” is a totally cool storyline for season three and a big important part for Nathan. It was sort of hinted back in season two. In the third season, we find out who they are and Nathan becomes involved with them for reasons that may not be clear initially. There is this whole other side of Haven that you get to see this season. Especially at the end of the season, there is a very large reveal about “The Guard”, which pretty wild.

MG: Tell us what we can expect from Nathan and Duke’s relationship this season?
LB: Those two guys relationship is always interesting. This total love-hate relationship. Total enemies in one respect and brothers in another. They have a real love for each other. That relationship is tested even more in this third season. Working with Eric Balfour is such a blast. Nathan is such a straight man and Duke is such a clown. It just ends up being great playing off each out. Balfour performance in this show just helps me amp up my game.

MG: What new guest stars and/or characters are we going to get to meet this season?
LB: We have a bunch of great new characters this season. Dorian Missick plays an out of town cop that comes to Haven. His character is exactly what the show needs. He is an outsider that comes to town and asks “What? Are you kidding me”? It is great to have someone questioning what is going on in the town. Nathan and Tommy get to hang out a bunch. Bree Williamson is going to be playing Claire, who is a very big person for Audrey on the show. She is just so lovely and a great actress. Then Kate Kelton plays a character named Jordan that Nathan also has a lot to deal with. Their relationship I can’t go into but its going to be wild.

MG: This show was spawned from Stephen King’s novella “The Colorado King” but has really developed its own wings, can you reflect?
LB: “The Colorado King” doesn’t really answer much in the book. It poses a question and then leave you. Season one was true to that. We asked a lot of questions and brought the character to a place but left them clueless, like the audience. Season two we got a little more answers. Then season three it is like the lid is blown off with the questions. The reveals are big and huge. The character of the The Colorado King factors hugely in season three, which is a really cool storyline. It just blew me away.

MG: I have been a huge series since episode one but it seems like this season is going to be so much more than the past, can you reflect?
LB: On the last day of shooting, we looked back on the season and I said to Emily (Rose) and Eric that I was just totally stoked with this season. The pace of the show is just totally elevated. The season is much more ambitious than anything we have ever done. The production value is phenomenal. Fans of Stephen King will enjoy that the show is a lot darker, creepy and dangerous this season.

MG: Speaking of Stephen King, has he ever visited the set or considered a cameo?
LB: Stephen King calls me every morning….no [laughs]. I haven’t met him yet but would love to. I know the writers have been in contact with him. He has given his blessing and seems to be happy with the show and where it is going. That is totally cool. We are consistently trying to get him to come and do a cameo. That would be very wild and I would love to see that happen.