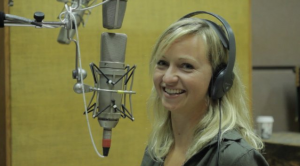 Mike Gencarelli: Being the voice of both voice Applejack and Rainbow Dash; give us your reaction on this enormous fandom surrounding “My Little Pony: Friendship Is Magic”?
Ashleigh Ball: It is something that I would have never anticipated. There is no way to prepare yourself for something like this. It is very cool to get recognition for doing voice work. It is also very cool that it is a totally unexpected group of people. So it is all weird and wonderful and I love it.

MG: How did you meet up with Brent Hodge to narrate and star in “A Brony Tale”?
AB: Brent and I have known each other for a while now going back to 2008/2009. We met through music. He used to work at CBC Radio 3 and did some interviews with my band Hey Ocean! and we got to know each other that way. We became close and he was always willing to help out with the band. So we were out to dinner one day and we had this discussion about Bronies. I told him he should come to BronyCon with me and start filming this because it would make a really cool documentary. So he agreed and followed me around and got a taste of the Brony life.

MG: Was BronyCon your first interactions with Bronies?
AB: My first interaction was actually caught on film. You can find it on YouTube. Brent also put the clip of me in the film as well. It was at a concert that I played in Vancouver. I was playing a show with my band and afterwards a group of guys came to the merchandise booth and asked me to sign their ponies. They were Bronies and they came all the way from Seattle. So that was the first time I met a Brony in person…and definitely not the last time!

MG: Do you think that this film will have an impact for these fans?
AB: Yeah. I think it is a great introduction into the world of Bronies. It explains who they are and what they stand for. It is way more of a community than the actual series. It is a good for someone who is not familiar with Bronies and think it is weird or perverted. It definitely clears up the whole Brony mystique.

MG: How did the film get support from Morgan Spurlock?
AB: Yeah, it was pretty crazy. Brent worked for a company in San Francisco and was at a Super Bowl party and Morgan was there. They told them about he was doing a documentary about Bronies. Morgan loved the idea, watched the film and called the next day and wanted to be involved. He is really excited about the film and the subject matter. I got to meet him in NY and he is a very cool guy.

MG: Season four of “My Little Pony: Friendship Is Magic” just ended but I am sure that fans are looking forward to season five already; any news from that?
AB: Yeah, we are in the process right now of recording season five. It is great. I can’t tell much about the episodes, but it is going to be very great. Lots of cool music and plot twist. Yeah, it is going to be great. It has such great writing and it is a wonderful show to be a part of.