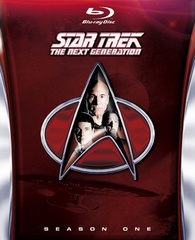 I have to first admit that I am new to the whole “Star Trek” universe. Earlier this year, I have completed watching the Original Series, the Animated Series and currently I am halfway through Season Six of “The Next Generation”. Let me tell you I am completely immersed in this series and I feel like I have been living and breathing “Star Trek” over the last few months. I have purchased shirts, iPhone cases and even baby onesies to only enhance my trek into becoming a full on “Trekkie”. I feel that my review would actually provide a unique perspective to this release, especially since I am not your typical hardcore fan. When I recently watched the first season of “Star Trek: The Next Generation”, courtesy of Netflix, I couldn’t help by thinking how terrible this series looked and it really needed an HD upgrade bad! Well, all of our prayers have been answered because this release brings the first season re-mastered beautifully in high-definition and just in time for the show’s 25th anniversary.

Firstly, when they say that this season has been restored, they are not saying that lightly. This show looks like it was ran through the cleaners and it is super pristine with proven before/after results. It is also is presented in the original 4:3 ratio, which should be a must for fans. Those who think that it would be better widescreen should know that this show was specifically shot for full screen ratio and wouldn’t even be able to be converted to widescreen without distorting the picture. Even though the first season isn’t the most highly regarded in the series it is still a great start and only a sample of what we can expect for future seasons. One thing that I was hoping for though was a better case presentation, the season’s 25 episodes are spread out among six discs delivered in a slim BD case with a slipcover. I liked “The Original Series” Blu-ray packaging way more than this but nonetheless fans of “Star Trek” couldn’t have asked for a better high definition jump to warp speed for this classic sci-fi series.

Let’s talk a little bit about the video presentation for season one of “The Next Generation”. These episodes haven’t been just remastered from the existing film masters, they actually went back to the original 35mm camera negatives and redone all the visual effects, all in high definition. The special effects are completely updated and revised, sort of what Lucas did with the “Star Wars” trilogy. The 1080p transfers of each episode are extremely sharp and are very impressive, summing up a really excellent restoration. There are two audio tracks included on this release. There is a mind-blowing DTS-HD Master Audio 7.1 track and a retro Dolby Digital 2.0 track as well. Personally the 7.1 track completely trumps the 2.0 track, the clarity of the sound is super clear and also completely restored. You honestly feel like the action is happening all around you and you are flying through space with the USS Enterprise.

Click play to watch the incredible side-by-side look at the transformation of “Star Trek: The Next Generation” into high-definition.

This release also includes a bunch of exclusive special features including never-before-seen archival footage, many brand new interviews and much more! Honestly the special features are worth the purchase alone for any true “Star Trek” fan. The extras are split over the 1st and 6th discs. Disc 1 starts off with a promo for Season Two of “The Next Generation” on Blu-ray, which I was very pleased to see that they are planning these seasons back-to-back. It is even more exciting since it revealed that it will contain a brand new, high definition 75-minute roundtable with the cast of “The Next Generation”. You can really tell that they are looking to please their series fans and not just cash in on a high-def release. There is the retro 1987 series introduction trailer, a season one vintage promo, three more launch promos as well as three episode promos. The real draw for this disc though is a brand-new 25-minute documentary titled “Energized: Taking The Next Generation to the Next Level”, which focusing on the remastering process and how they went to the original camera negatives and restored the visual effects in HD.

The rest of the special features are included on disc six, mostly vintage extras from past DVD releases but still worth checking out. Included are four production featurettes, “The Beginning”, “Selected Cast and Crew Analysis”, “The Making of a Legend” and “Memorable Missions”. It covers quite a bit of ground. Next up is a great three-part 95-minute documentary called “Stardate Revisited: The Origin of Star Trek: The Next Generation.” It provides some really comprehensive information about the series. The first part is called “Inception” , the second is “Launch” and last is “The Continuing Mission”. Don’t miss this for sure! Lastly there is a great 8-minute gag reel. “Star Trek: TNG” has always had a great sense of humor and this shows it. There is also another teaser for season two on this disc as well. I really am looking forward to what they are planning next, especially after this already amazing release.