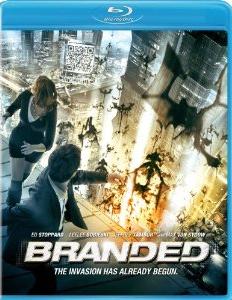 When I saw the poster for “Branded” at my local theater, I wondered where did this film come from?  Well, after watching it – I wish it would have slipped a little lower under my radar.  This film is a complete waste of time…PERIOD.  The film packs a super cool cover and premise promising some great action and science fiction aspects.  The film takes over an hour – AN HOUR! – just to introduce the sci-fi genre and from there completely fails to do anything useful after that as well.  The cast is also completely out of place with Leelee Sobieski and Jeffrey Tambor.  Max Von Sydow was nominated for an Oscar in 2011…what was he thinking?!

Ed Stoppard, Leelee Sobieski, Jeffrey Tambor and Max Von Sydow star in this mind-bending, edge-of-your seat sci-fi thriller set in a surreal, not-so-distant future. In a dystopian society where mega-corporations rule, a terrifying conspiracy has been unleashed one that controls the minds of the citizens. One man (Stoppard) is determined to unlock the truth behind the conspiracy. His quest to find it will plunge him into a tangled web of power and intrigue, leading to a shocking revelation and an epic battle with the hidden forces and creatures that threaten the fate of mankind.

The Blu-ray presentation of this release is also completely bland just like the film.  The 1080p transfer looks good enough but doesn’t pack any “Wow” factor.  The DTS-HD Master Audio 5.1 track sounds the best in its introduction logo than it does the rest of the film.  There is only one special feature included on this Blu-ray, which is an audio commentary with directors Jamie Bradshaw and Alexander Doulerain.  This is worth missing just like the film. Don’t let the box and cool premise draw you in…unless you feel like wasting two hours of your life. Go rent John Carpenter’s “They Live” instead!