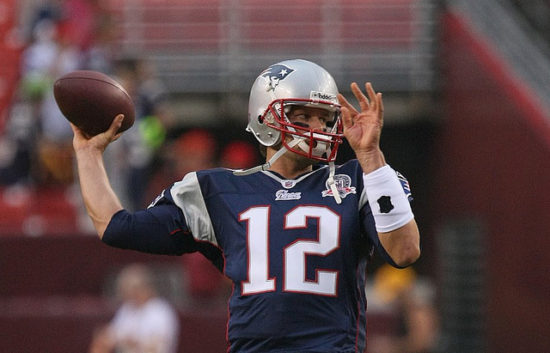 Tom Brady and the New England Patriots just get better and better. On February 5th 2017, the 39-year-old produced one of the greatest Super Bowl comebacks to lead New England to a shock victory over the Atlanta Falcons. Nobody ever doubted Brady’s ability to put pressure on Atlanta’s defence in the second half but overturning a 25-point margin took him to a league of his own.

Being completely honest, you could definitely make an entertaining and dramatic film based purely on Super Bowl 51. But when you look back over Brady’s illustrious career, you see the entire story from college to draft day, from his Patriots debut to his first Super Bowl and to the present day; a five-time NFL champion. And it’s the stuff of cinema for sure.

When he was drafted by New England with the 199th overall pick in 2000, nobody expected Brady to achieve much at all, let alone win nine AFC Championship titles and five Super Bowl rings – we’ve all seen Draft Day after all… Time and time again, Brady has overcome diversity to prove everybody wrong, and that certainly makes for a great Hollywood story. In true underdog fashion, 31 other franchises passed on Brady in the NFL Draft. Even the Patriots opted to look elsewhere in the first five rounds.

In a way, Brady has been the Adam Sandler of New England; controlling proceedings from quarterback just as Sandler does in The Longest Yard. And while some may claim that Bill Belichick, Brady’s long-time head coach at New England, holds many similarities to the warden in that particular movie, his influence at the top has been a key reason for Brady’s success at the position.

The source of #Patriots Greatness. pic.twitter.com/OWXe7ZClGG

An interesting point to consider is the timing of a potential Brady movie. Do you start filming now whilst he is still playing or focus on developing an idea and then produce the movie when he’s retired? For now, Brady will remain focused on helping New England in their bid to win a sixth Super Bowl crown. According to some reports, the Patriots have already filed to trademark “Blitz for Six” and fans may be set for more “Belichickian” terms and phrases in the coming months.

The Patriots have dominated American football in the USA in recent years and a film focused on main man Brady may be well received should New England succeed in their “Blitz for Six”. One documentary, Year of the Quarterback: The Brady 6″ has emphasised on the respective careers of those quarterbacks selected before the New England man in the NFL Draft that year but it is time for a film-maker to turn attention to the greatest quarterback of all-time.

You won’t see another story quite like this in sport and if New England, +550 to win next year’s Super Bowl in bet365’s American football betting markets, can secure another title, every media platform in the United States would be looking to film and broadcast the documentary. Tom Brady is now bigger than a football player. He is a global icon and his sporting successes could very well plateau him onto the big screen in the coming years.

Whether you like him or not, Tom Brady’s achievements deserve plenty of respect and you have to admire his hunger to succeed on the big stage. The “Brady or Joe Montana” debate is subjective of course, but the New England man is certainly a bigger star than Montana ever was, and a movie based around his entire football career could potentially go down as one of the greatest sports films to hit the cinema.