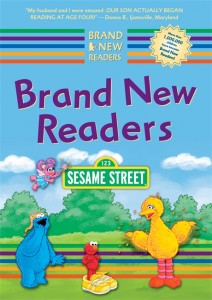 I am not the biggest fan of “Sesame Street”, I prefer Disney but they cats know how to teach kids.  I mean I turned out pretty decent from my Sesame Street learnings.  This book is called “Brand New Readers” and could not be any more engaging for little kids who are learning to read.  It comes in a very nice hard case with individual books included inside.  There are ten short full-color books featuring Big Bird, Grover, Elmo, Abby, Bert, Ernie, Cookie Monster, and more.

If that is not enough there is also a fold-out poster with full-color stickers, which is used for tracking which books are read.  It is topped off with a “Brand New Readers” certificate of achievement, which will assist in building children’s confidence when the series is completed. There is also a make-your-own Brand New Reader book, which will work to encourage our brand-new writers.  This book will allow act as a great teaching for a parent to make reading not only easy but also fun. This is a must for all kids, who are looking to take the next step in their life.

Each month, The Acting Studio at Edgemar Center for the Arts in Santa Monica  presents The Actor’s Golden Box, a two-day intensive program of training taught by renowned acting coach Michelle Danner.

Actors learn how to create vivid, fleshed-out and interesting characters through an intense and emotional workshop with technique exercises and lectures. Not just for actors, the course is also of benefit to writers and others in allied professions.

The class is supported by film clips and there are discussions and analyses of performances by Meryl Streep, Judi Dench, Anthony Hopkins, Al Pacino, Marlon Brando, James Dean and others.

Exercises include learning how to build provocative and complex back stories by opening up your instrument emotionally and finding triggers and psychological gestures in your work.

Danner, Artistic Director of the Edgemar Center for the Arts, has coached some of Hollywood’s most elite actors including James Franco, Salma Hayek, Gerard Butler, Chris Rock, Penelope Cruz, Isla Fisher and more. She has directed and acted in over 30 plays and musicals in Los Angeles and New York, and has directed two films, “How to Go Out on a Date in Queens” (starring Jason Alexander and Rob Estes) and the recently-completed “Hello Herman” (starring Norman Reedus and Martha Hagerida).

The Actor’s Golden Box is conducted once each month on a Saturday and Sunday at Edgemar Center for the Arts. Please call (310) 392-0815 for exact dates, times and registration information.

The Acting Studio at Edgemar Center for the Arts is located in a two-theatre and art gallery complex in Santa Monica. The address is 2437 Main Street, Santa Monica, California 90405.

Michelle Danner and Larry Moss founded Edgemar Center for the Arts, a two-theatre and art gallery complex in 2000. The Larry Moss Studio has been housed at Edgemar since the cutting of the ribbon in 2002 and has flourished and grown into what is now The Acting Studio at Edgemar.

Classes offered in The Acting Studio at Edgemar Center for the Arts: