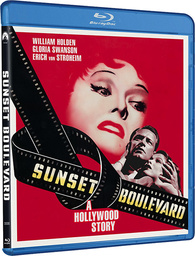 Being a film buff everyone know’s that “Sunset Boulevard” is a must in your library. The film still engages you like it was just released today. The acting is nothing short of spectacular. William Holden and Gloria Swanson are such iconic characters actors and they can never be replaced. “Sunset Boulevard” heads to Blu-ray for the first time ever. It looks good in its 1080p transfer, with its 1.37:1 showcasing the original aspect ratio. Since the film is over 60 years old, there is some noticeable grain throughout the film. Still due to the film age it does get some high points in my book.  This is a must for all fans of classic cinema.

This is not just catalog title that is being released to Blu-ray. “Sunset Boulevard” was fully restored and made to maintain the look/feel that was originally created by the director and cinematographer. Since there was no original source that survived. The restoration team ended up having to use a 35mm negative for the main source for its 4K restortation. So in terms of that what we have as the finished product is impressive. The audio on the Blu-ray is also impressive with its minimalistic yet true to the original film, Dolby TrueHD Mono track.

The special features here are the very impressive for this release with over two hours of extras, including a never-before-released deleted scene “The Paramount-Don’t-Want-Me Blues”, which was obtained from the Academy Film Archive and features Academy Award-winning songwriters. Together these extras really aim to paint the picture for the entire story of “Sunset Boulevard”. There is an audio commentary track from Ed Sikov, author of “On Sunset Boulevard: The Life and Times of Billy Wilder”. Not the most engaging track but still very informative if you are a film buff.

“Recording Sunset Boulevard” reflects on Franz Waxman’s classic score. “The City of Sunset Boulevard” takes a look into the shooting location used in this classic. “Franz Waxman and the Music of Sunset Boulevard” is another look into Franzz work with the insights of other known composers. “Morgue Prologue Script Pages” includes a reproduction for the various versions of the famous cut opening sequence. There is an interactive map of Sunset Boulevard with videos on various locations. “Behind the Gate: The Lot” looks back at the history of Paramount Pictures. “Edith Head: The Paramount Years” looks into the life of the famous costume designer. “Paramount in the ’50s” takes us back to view Paramount’s best films from the 1950s. Lastly there are various photo galleries and an HD theatrical trailer included.

“Off The Boulevard” is not only an entertaining film and but also a very informative documentary. It shows how is to be independent in the entertainment business or in life in general. The film follow seven artists: two musicians (Keith Jackson, Nick Nicholson), two filmmakers (Jeff Santo, Troy Duffy), two actors (David della Rocco, Sanel Budimlic), and one comedian (Bob Rubin). It shows that no matter what you are trying to accomplish in life, it is a struggle especially when working independently. It is definitely aimed to inspire people out there to keep trying in their careers and doing what they love.

The director Jeff Santo is known best for his film “Liar’s Poker” but he also has been burned many times by the system. Troy Duffy, the creator of “The Boondock Saints” is the same way. He had has many struggles after making the first “The Boondock Saints” and his side is told here. The musicians in the film Keith Jackson, Nick Nicholson, strive in the business to get their music heard. Bob Rubin is a comic that just want his jokes to be heard. We visit the life of David della Rocco, who is a struggling independent actor. Sanel Budimlic escaped the Bosnian War to come to America with hopes to live as an actor. Besides the seven artists, the film also reaches out to other industry well-knowns such as: Dan Haggerty (Grizzly Adams), Eddie Vedder (Pearl Jam), Gilby Clarke (Guns N’ Roses), Joe Mantegna (Criminal Minds), Peter Fonda (Easy Rider) and Sonny Barger (Hell’s Angels). They give advice and life lessons about the meaning of being and working independently.

I must acknowledge that Jeff Santo sure did a great job directing this documentary.  The editing is fantastic and the film is well paced. Since the film is focusing on two musicians, one punk rock and the other country…you know the film is going to have some kick ass tunes in it for sure. If you are into film-making, especially independent then this is a must see for you. Click here to support being independent and pick up a copy of this film. Spread the word! 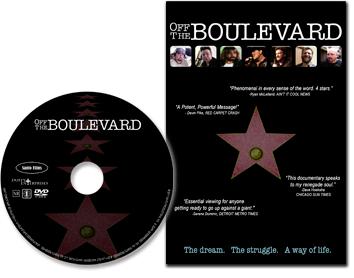 “OFF THE BOULEVARD” TAKES VIEWERS ON AN INSPIRING JOURNEY

Los Angeles, August 10, 2011 – Troy Duffy (Creator of The Boondock Saints franchise) announced today the pre-sale availability for the launch of a documentary feature film, “Off The Boulevard,”  he executive produced in partnership with Santo Films.

“It’s an interesting and educational behind-the-scenes look at the struggles fellow independent artists go through in pursuit of their dreams,” says Executive Producer Troy Duffy. “It gives us an inside look at the tough lives of some up-and-coming independent artists.  As we watch them fight their way through the industries of music and film, we glean words of wisdom from successful veterans of the entertainment business.”

Off The Boulevard is a story of art and heart and the dedication it takes to achieve your dreams. It is an entertaining and informative documentary feature film about seven artists: two musicians (Nick Nicholson, Keith Jackson), two filmmakers (Troy Duffy, Jeff Santo), two actors (David Della Rocco, Sanel Budimlic), and one comedian (Bob Rubin), whose friendships are created through struggle and perseverance.

“Off The Boulevards follows seven artists on different paths but with the same goal- to fulfill their dreams,“ says Jeff Santo, Director.  “This film transcends the world of entertainment and my hope is it will inspire all who strive to pave their own road.”

Ain’t It Cool News claims it’s “Phenomenal in every sense of the word. 4 stars.” Detroit Metro Times writes it’s “Essential viewing for anyone getting ready to go up against a giant.”

Available now for pre-order exclusively at: www.santofilms.com and www.BoondockSaints.com  at an introductory rate of $14.99.    (Autographed copies available for an additional fee.) (Pre-orders at this introductory rate are available through Sept. 7th)  DVD begins shipping Sept. 7th, 2011.

Jeff Santo has over 17 years of dedicated Independent Filmmaking experience in all aspects of creating and selling Independent Films. Jeff has written, directed, and produced four Feature Films. His first film, ‘Liar’s Poker’, had an exclusive Blockbuster Video release in 2000 and sold in every major foreign market. His second film and first Documentary Feature, ‘This Old Cub’, had a six month theatrical run in 2004 and was Independently Distributed by Jeff and his team, selling over 40,000 DVDs exclusively on its own website. Santo Films also sold directly to retail stores, selling a total of over 75,000 DVDs to date.  In 2008, Jeff’s third film, an Independent Family Drama ‘Jake’s Corner’, was released theatrically.  He is currently in distribution with ‘Off The Boulevard, ‘ a Documentary Feature Film he envisioned, directed and produced.  Jeff teaches Film School at S.C.C. in Arizona and has been a featured guest speaker at several Independent Film Distribution seminars.