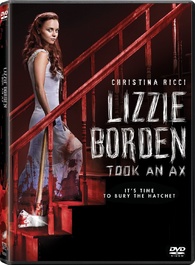 “Lizzie Borden took an axe
And gave her mother forty whacks.
When she saw what she had done
She gave her father forty-one.”

…but then I realized that this was a Lifetime Original TV movie and then I lost all expectations. If you know the story of Lizzie Borden, you would expect a very dark and violent film. This film focuses more on the court room battle than on the live of Lizzie Borden and her horrific murder. I have to give it to Lifetime for attempting to tackle a subject like this but personally this needs to be made for HBO or even AMC (they get away with murder -get the pun? haha- on “The Walking Dead”). Lifetime also recently released a bio pic of Anna Nicole Smith, which to be honest felt exactely the same. They both played it too safe for its content. I have always been interested in Lizzie Borden and it blows my mind that even after over 120 years people are still as well. Worth checking out for the performances, if you expect a TV watered down version of the topic.

Official Premise: On a scorching, hot summer day in 1892 in Fall River, Massachusetts, Lizzie Borden (Ricci) returns home to the house she shares with her father Andrew, stepmother Abby and sister Emma (DuVall). But, unlike any normal day, Lizzie encounters the bloody scene of her parents violently murdered. Police quickly question multiple suspects in town, but evidence keeps pointing back to the Borden’s youngest daughter Lizzie, the seemingly wholesome Sunday school teacher, as the prime suspect. Lizzie?s lawyer, Andrew Jennings (Campbell), proclaims her innocence arguing that it is inconceivable a woman could commit the heinous crime of brutally murdering her family with an ax. Or is it? Lizzie is put on trial for the murders, both in the courtroom and in the press, sparking a widespread debate about her culpability. As the case rages on, the courtroom proceedings fuel an enormous amount of sensationalized stories and headlines in newspapers throughout the country, forever leaving Lizzie Borden’s name in infamy.

The best thing about this film is no question Golden Globe and Emmy Award nominee Christina Ricci (TV’s “Pan Am”). She really gets behind Lizzie and nails the role. She is also backed with a great supporting cast including Golden Globe Nominee Billy Campbell (TV’s “Helix”) and Clea DuVall (“Argo”). Unfortunately, the cast cannot make up for the lacking wow factor that this film does not possess. Either way, this film was a huge success like “Anna Nicole”, when it original aired on January 25, 2014 bringing in 4.4 million viewers and making it the night’s number-one telecast among all key demographics. So like it or not, expect more films like this from this station in the near future. No special features at all are included on this DVD.