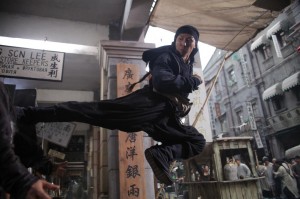 Donnie Yen is known best for his recent roles of “IP Man 1 & 2” and he is really one hell of martial artist. I could even watch him make a batch of pancakes for two hours. Even though in this film, Donnie is not the primary focus of the film, it is still a good film. The running time clocks in a just sky of 2 hours and 20 minutes, which feel a little long. The action in the film is good and features an hour long battle sequence, which is unreal.

Set in 1905 in China, we are watching the beginning of the revolutionary moment. When political representative, Sun Yat-Sen is planning a meeting that will shape the future of the country, the plot is out for his assassination. It is up to a motley crue of men and women who are entrusted to protect him at any cost. They will be pushed to the test because these people will stop at anything to see that this meeting does not happen.

The film is a mix of politics, personal sacrifice, as well as fantastic martial arts. The rest of the cast is amazing and really adds a lot of heart to the film, especially in its second act. If you follow MMA, keep an eye out for the fighter Cung Le as well. Overall once the film gets started it kicks some major ass and definitely delivers…if it could have done it a little quicker it would have been perfect. Worth a watch for sure if you are fan of Donnie Yen and martial arts films.

The extras on the disc are good with five behind the scenes featurettes. I also love these for martial arts films because you get a really cool look of how they do all the amazing work that they do in the film. Next we have extended interviews with cast and crew, which I always enjoy a good interview being an interviewer myself. The international trailer is included as well. Lastly, there is a QR code on the disc which includes even more additional bonus materials. I think that this is a great way to include the new barcode technology and also a great way to include more content not on the disc.

“Bodyguards and Assassins” will be released on DVD on July 26th, 2011, MovieMikes would like to giveaway THREE COPIES of this film on DVD. If you would like one of these, please leave us a comment below or send us an email and let us know you about your favorite Kung Fu movie. This giveaway will be open until Tuesday July 26th at Noon, Eastern Time. Once the giveaway ends, Movie Mikes will randomly pick out winners and alert the winners via email.

5 hours. 13 blocks. To Save a Nation’s Future
They Must Protect One Man From its Past

Sun Yat-sen is on the verge of merging the provinces to rise up against the Qing Dynasty. A secret planning meeting in the city of Victoria is set to take place, but it will all be for naught if they can’t get him in and out of the city in one piece. Word of his presence in the British Colony of Hong Kong, brings with it a trove of assassins with only an order to make sure he does not leave the city alive. The bodyguards work together knowing there isn’t freedom without sacrifice.

The motley crew of bodyguards includes Cantopop superstar Leon Lai (Seven Swords) as the opium addict trying to redeem himself from a family shame; Wang Xueqi (Warriors of Heaven and Earth) as the Tycoon, a secret sponsor of the revolution who is suddenly asked to compromise way beyond his comfort zone; Teen idol Nicholas Tse (The Medallion, Storm Warriors) as the rickshaw driver, a humble man following his heart and love for the family he serves; Tony Kai-fe Leung (L’Amant, The Missing) as the Revolutionary, who strives to protect Sun Yat-sen at all costs. Also featured, is former NBA player (Raptor’s, Spurs and Nuggets) Mengke Bateer as the honorable Tofu Vendor who uses his towering size and fighting skills to take on the highly trained assassins, led by Hu Jun (Red Cliff).

The epic film took ten years to complete (Documented in the film “Documentary Hell.”) including the construction of the biggest 1:1 scale set of Hong Kong ever built. Sun Yat-sen is known as the Founding Father of the Chinese Republic, and the main catalyst for the Xinhai Revolution of 1911 which saw the overthrow of the Qing Dynasty, the last imperial dynasty in China.

Synopsis:
Donnie Yen (Blade II, IP Man, Hero) and MMA fighter Cung Le star in this gripping martial arts blockbuster set in the bustling metropolis of Hong Kong in 1905. The revolutionary movement has spread throughout China, but the corrupt Qing dynasty will do anything to hold on to its power. As Sun Yat-Sen prepares for a historic meeting that will shape the future of the country, a motley crew of men and women are entrusted to protect him from a group of deadly assassins who will stop at nothing to kill him. Winner of eight Hong Kong Film Awards, including Best Film, and featuring an hour-long battle sequence unlike anything attempted before, it’s a pivotal action epic that’s being hailed as “a satisfying mix of politics, personal sacrifice and death-or glory combat” (Richard Kuipers, Variety).