I have been a huge of the “Blood: The Last Vampire” franchise, especially a new series from the creators of “Ghost in the Shell”, “Blood-C”. The internet trolls have been quite harsh to this feature film sequel to that anime series, so I was a little nervous watching this but overall, I thought it was definitely watchable. It is not the strongest entry in the series but does feature some solid action and overall entertaining. In terms of the story it doesn’t add too much to the franchise but I think fans were a little too intense about this film, especially since it is quite visually. I would recommend it.

Official Premise: Saya is part human, part monster, and has one thing on her mind: REVENGE. Visions of twisted experiments and creatures slaughtering everyone she loved fuel her thirst for vengeance. With blade in hand and rage boiling in her veins, she tracks her tormentor to Tokyo, where flesh-hungry beasts have begun to feed. There, she joins a group of young hackers hunting for the same man. As Saya slices her way through lies, traps, flesh, and bone, how much blood will she shed to cut down the mastermind behind her madness?

FUNimation Entertainment delivered an impressive Blu-ray + DVD combo pack release as they have in the past with “Blood-C” as well. Same goes for the 1080p transfer in 1.78:1, which looks quite amazing. The colors are sharp and really pop especially the color red (but I don’t understand why ­¤śē ). There are two audio tracks including with an English and Japanese Dolby TrueHD 5.1. The English track definitely feels more epic. In terms of special features, the only real extra is an┬ĀU.S. Actor and Staff commentary track. The rest of the extras include┬ĀNoNeNoNe Theater, which comes in six parts. There are some Promotional Videos, the┬ĀOriginal Teaser/Trailer and U.S. Trailer. 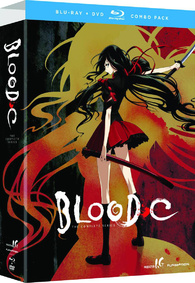 If you are aware of┬ĀProduction I.G’s anime “Blood: The Last Vampire” from 2000 and it’s follow up 50 episode series “Blood+”, then you are going to LOVE “Blood-C”. This new series consists of 12 episodes and is made along with┬Āthe manga creators┬ĀCLAMP. ┬ĀThe series manages to consists of a nice mixture of sweet and cute while still managing to kick some major ass and comes packed with gore. The production value is impressive and the animation is really clean and sharp. As the story develops, the show really gets its wind in towards the end of the series but still really entertains throughout each episode. The main issue I had with the series is that I would have loved for it to be longer. ┬ĀIf you are a fan of the manga then this really aims to please for sure. I hope that Production I.G. contains this franchise going as I cannot get enough of it.

Official Premise:┬ĀThe creators of “Blood – the Last Vampire” and “Blood+” team up with renowned powerhouse CLAMP to inject beauty into a chilling new addition to the Blood line. Horrifying beasts with a hunger for human flesh prey on the citizens of a quiet town. In moonlit twilight, Saya slays the monsters and returns home drenched in blood. As the attacks increase in frequency and intensity, her enemies relay cryptic messages about a broken contract. Limbs are torn from flesh and skulls are crushed and devoured while the huntress struggles with paralyzing visions and gaping holes in her memory. When the humans Saya promised to protect reveal the sickening truth about her role in the violence, she learns her mission isn’t as clear cut as she thought-and her most sadistic foe of all is so close she can taste it.

This Limited Edition release comes in a ┬ĀBlu-ray + DVD combo pack. ┬ĀThis four-disc set including two Blu-ray dics and two DVDs. ┬ĀThey are packages in a slipcase cover with individual cases for each format. ┬ĀIt is a little weird that a DVD comes in a Blu-ray case but either way I like having the option of either Blu-ray or DVD. ┬ĀThe┬Ā1080p transfer of the episodes really look fantastic, especially the colors┬Āred and black ;-). The episodes are also presented with their original aspect ratio of 1.78:1. ┬ĀThe audio included packs a very nice (and preferred) English track with Dolby TrueHD 5.1 and the┬ĀJapanese track includes a Dolby TrueHD 2.0 track. ┬ĀThe special features are lacking a bit with the main extra being two commentary tracks. ┬ĀThe first is on episode 6 with director Jerry Jewell and Robert McCollum, the voice of Fumito. The next is on episode 12 with Jerry Jewell with Alexis Tipton, the voice of Saya. There is the┬ĀTextless Opening and Closing Songs “spiral” and “Junketsu Paradox”. ┬ĀLastly there are the┬ĀOriginal Commercials,
Promotional Videos (both in 1080i) and┬ĀU.S. Trailer included.