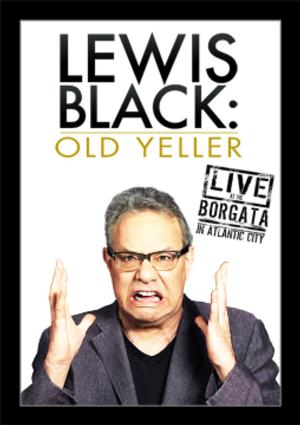 The First Ever Live Comedy Special to Air Simultaneously on all PPV and VOD Carriers on August 24, 2013

LOS ANGELES (July 30, 2013) – Image Entertainment, an RLJ Entertainment (NASDAQ: RLJE) brand, has set the date for the Pay-Per-View (PPV) and Video On Demand (VOD) Mega Comedy Event LEWIS BLACK: OLD YELLER – LIVE AT THE BORGATA. This will be the first ever live comedy special to air simultaneously on all cable, satellite and telco platforms including Xfinity, Time Warner Cable, Cox Communications, DirecTV, Dish, Cablevision, Charter Communications, AT&T U-Verse, Verizon FiOS and many others. The show premiers live on Saturday, August 24th at 9:30 PM EDT, followed by replays on those platforms. It is presented in both SD and HD.

In his ninth comedy special, Lewis Black tears into a country that is going nowhere at the speed of light. OLD YELLER weaves the riotous tale of a country that is so strung out on ADD that it can’t see straight. In his rabid attack, Mr. Black even turns on himself—and his entire generation. From cable television to the computer, from Facebook to Twitter, Mr. Black rages about the prison we’ve insanely created for ourselves. He snarls at the country’s failure to find alternative energy sources while creating cell phones out of the realm of science fiction. He mauls our nation’s leaders for their laughably inept handling of social security and health care—and failing to provide help on any level whatsoever. As Mr. Black puts it, “What are you going to do when the Democrats are dumb, the Republicans are stupid and the Tea Party doesn’t even know what day it is?” He takes what makes us crazy and makes it funny. It’s a night of live comedy you won’t forget. . . “but if you do, it’s probably because you’re taking a drug that lowers your cholesterol,” he adds.

The announcement was made today by Image Entertainment’s Chief Acquisition Officer, Bill Bromiley.

“We are proud to be the first to debut this groundbreaking comedy special simultaneously live on all cable and satellite providers,“ said Bromiley. “Audiences will have even more of an opportunity to see for themselves the genius of Lewis’ comedy.”

The deal was negotiated by Bromiley, Jonathan Saba, the executive in charge of production, and Michael Bayer on behalf of Image Entertainment and Jim Gosnell, President and CEO of APA, and Leon Dang on behalf of Lewis Black.

“We are excited to be a part of this comedy special that will utilize a largely untapped mode of distribution for standup,” said Gosnell. “This event will revolutionize the way audiences see live comedy, and there’s no doubt comedians will follow in its footsteps.”

Receiving critical acclaim as a stand-up, actor and author, Lewis Black has performed for audiences throughout Europe, New Zealand, Canada and The United States. In 2012, he performed eight sell-out shows at The Richard Rodgers Theatre on Broadway.

Lewis got his first big break in comedy back in 1996 when he created the segment Back in Black for Comedy Central’s The Daily Show. It became one of the most popular and longest running segments on the show and also created a long and successful relationship with the network. Since then, Lewis has taped four specials for the Comedy Central Presents series, co-created Last Laugh with Lewis Black, presided over Lewis Black’s The Root of All Evil, and continues to perform Back in Black on The Daily Show with Jon Stewart. His popular appearances on Comedy Central helped to win him Best Male Stand-Up at the American Comedy Awards in 2001.

Increased exposure from The Daily Show eventually generated a record deal with Stand Up! Records. His first CD, The White Album, was released in 2000 to much critical acclaim. Lewis followed with eight more, six under the Comedy Central Records label. He has been graced with five Grammy nominations and two wins for his work. The first nomination came in 2006 for Luther Burbank Performing Arts Center Blues, the second in 2009 for Anticipation. In 2007 he won the Grammy for Best Comedy Album for The Carnegie Hall Performance and in 2011, his second for Stark Raving Black. His most recent release, In God We Rust (Comedy Central Records) was nominated for a Grammy.

Lewis filmed two specials for HBO, Black On Broadway and Red, White and Screwed. The latter was nominated for an Emmy in 2007. He had a regular feature for two seasons on Inside the NFL (for which he earned a Sports Emmy) and in 2006 was honored to be asked to participate in Comic Relief. In 2009 Lewis filmed his first feature length concert film, Stark Raving Black at the Fillmore Theatre in Detroit. The film had a limited run in theaters across the US and Canada in the summer of 2010. At the end of the theater run, premium movie channel EpixHD picked up the film for its channel along with the accompanying documentary Basic Black. Both are still aired regularly and can be found in the EpixHD on demand queue. 2011 found him producing his second full length concert, In God We Rust, which also still airs on EpixHD.