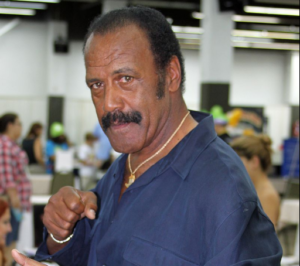 They called him “the Hammer.” While playing for the Pittsburgh Steelers, Oakland Raiders and Kansas City Chiefs, Fred Williamson was one of the most feared defensive backs in the history of the NFL, finishing his career with 36 interceptions in 104 games. He retired in 1968.

That same year he followed fellow football star Jim Brown to Hollywood, appearing on such television series as “Star Trek,” “The Bold Ones” and “Ironside.” In 1971 he had a recurring role as the title characters boyfriend on “Julia.” He made his feature film debut in the Academy Award winning film “MASH,” and later appeared in several classic “Blaxploitation” films, including “Black Caesar,” “Hell Up in Harlem” and “Three the Hard Way.” He also appeared as a Vietnam vet in an episode of “The Rookies.” A few years later, that character was featured in his own film, “Mean Johnny Barrows.” The story of a troubled Vietnam veteran trying to make it back in the world, the film preceded “First Blood” by six years. The film was also Williamson’s directorial debut.

Since then, he has appeared in such films as “From Dusk ’til Dawn” and “Starsky and Hutch,” as well as a series of films featuring ex-cop turned private eye Dakota Smith.

Mr. Williamson will appear at the Kansas City Comic Con from Aug. 12-14. Prior to his appearance he took some time out to speak with me about his “rules” for making films, the state of today’s action films and why the NFL isn’t what it used to be.

MIKE SMITH: At age 78 you are still working steadily.

MS: Is it as fun and exciting now as it was when you started your career?

FW: It’s more exciting because I control what I do now. Most of my films I direct and I write the stories. I hire three or four writers to write the script and I take the best parts from each writer and rewrite the whole thing myself. It’s more fun and more creative.

MS: Do you still make sure you get the girl and don’t lose a fight?

MS: I see you have another Dakota Smith film coming out.

FW: Yes, I have a new film called “The Last Hitman.” I also have a film that I made in Berlin called “Atomic Eden” and after that I have a film called “Check Point.” I have three films coming out in the next six months.

MS: You’re coming back to Kansas City this weekend. I assume playing in Super Bowl I would be your favorite memory of your time here. Do you have others?

FW: All the time I spent there in Kansas City contributed to my creative years in football. I had a great time in Kansas City. Kansas City was a challenge. You have to remember that this was in the 1960s, so the racial prejudice was very strong there and in other communities at that time. But for me that was motivation…it was what helped make me as great as I was. Someone telling me I couldn’t do something was an extreme motivator for me.

MS: Looking at the way football is played now – you can’t hit in training camp, only one practice a day, defensive players appearing almost afraid to hit for fear of being fined – do you think the game has gotten better or worse since you played?

FW: The game would be more expensive for me if I played today because I’d probably get a $25,000 fine the minute I stepped on the field. (laughs) The “Hammer” tackle would have gotten me kicked out of the game and fined $25,000. I think the thermometer is if you – the refs – can hear the tackle, it’s illegal. If you can hear the pads hit up in the stands, it’s a 15-yard penalty and a $25,000 fine for unnecessary roughness. It’s the changing of the game. That’s why you don’t see that many hard tackles now. Guys are reaching in and trying to stop them with their arms because they really don’t know how to tackle anymore. And these running backs are gaining more yards because no one wants to hit them. They run through arm tackles because most of them are strong runners so they just run through arm tackles.

MS: Nobody seems to know how to wrap up anymore.

FW: You can’t take a chance anymore. Wrapping up means laying your shoulder into him. You can’t wrap a guy up until you stop his momentum, and you have to stop his momentum by cracking him. But now if you crack him too hard it’s a penalty. How do you stop a guy without being able to hit him first? You can’t stop him with an arm tackle.

MS: How do you feel about the action films of today. Are they better now or worse then your films of the 70s and 80s because of being able to use computers?

FW: Computer things are boring, man. Who wants to see some guy jump out of an airplane and land on a moving car when you KNOW that’s not real? That’s not possible. To me it’s boring. They are losing their audiences because now the special effects are the star of the movie. Why do they pay a guy $20 million when the effects are the star of the movie? They need to go back to the days of Robert Mitchum. Gregory Peck. Richard Widmark. Burt Lancaster. Guys like that. You saw how they walked and how they talked. It wasn’t the fact that they could fly through the air or bounce off of a building or just miss getting run over by a car and then getting up and shooting the bad guy. No, no, no. Let’s go back to reality. There’s nothing real in those films.

MS: Thank you again for your time. I hope you enjoy your time back in Kansas City.