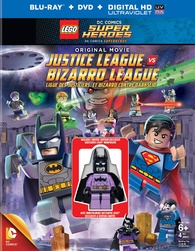 As the follow up to “LEGO Batman, The Movie: DC Super Heroes Unite”, “LEGO DC Comics Super Heroes: Justice League vs Bizarro League” brings the DC Comic universe together to battle a unique set of villains called The Bizarro League. Batman has joined the newly formed Justice League as a way to keep his eye on Superman. This task seems to be complicated by Superman’s clumsy clone Bizarro whose creation of his own league of off kiltered superheroes has caused its fair share of problems however an even greater force lurking in the shadows will force the two leagues together in an effort to defeat the impeding evil.

I have to start out by saying that I love the partnership between LEGO and DC Comics. Two of my favorite things growing up were LEGO’s and comics so whenever I get to enjoy the two at once especially in film form its always great fun. “LEGO DC Comics Super Heroes: Justice League vs Bizarro League” is a great follow up to the LEGO Batman film from a few years ago. Presented in stunning Blu-Ray all the colors, action and sound practically leap out of your screen as the tale of the two leagues join together to battle an evil which is threatening the world. Don’t let the idea of this film being a kids film fool you as there were plenty of times where I found myself laughing out loud at some of the dialogue between characters. I found this added to the films appeal making it a movie you can throw on and watch with the entire family.

Though the film is considerably shorter than the previous LEGO/DC film (by about 27 minutes to be exact) the disc comes packed with some really cool special features such as a Bizarro featurette and a blooper reel. Also for those purchasing the Blu-Ray Combo pack you get a really cool special edition Bizarro Batman LEGO figure so even though the film is a bit shorter the special features and figure certainly help its appeal making the latest release from LEGO and DC Comics a great addition to any LEGO or comic fan’s collection.