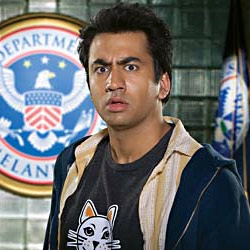 Kal Penn is known best for his roles in the “Harold and Kumar” film series and TV with “How I Met Your Mother” and “House”. He recently took a break from acting to take a job as the Associate Director in the White House Office of Public Engagement working with President Obama. His latest film “Bhopal: A Prayer for Rain”, which is a fictional adaptation of the Union Carbide chemical spill disaster of 1984 was made back in 2009 and finally getting a release on November 7th. Kal recently took some time to chat with Media Mikes to discuss his film and what we can expect.

Mike Gencarelli: What was it about “Bhopal: A Prayer for Rain” that made you returning to acting?
Kal Penn: I had a hard time trying to describe the film, while I was shooting it. Friends of mine asked me why I wanted to do this movie and I said that I felt that the script was very powerful. I knew that when I read the script it really appealed to me and it was like nothing I had worked on before. It was a fictional adaptation of something that had actually happened. I sat down with the director and asked him why he wanted to make it? He grew up not too far from where the disaster actually took place. There have been some documentaries about it and some articles and books but no one has ever done a feature length fictional adaption about it. At the time we made it, it was 25 years after the disaster. Plus the fact that Martin Sheen was doing it. So selfishly as an actor I couldn’t say no.

MG: With your position at the White House, when did you do this film?
KP: I took a sabbatical from acting from 2009 to 2011 and had the chance to work in the White House. I knew that I was going to leave during that second year to come back to acting. This movie actually split that time. It was shot in 2009 and it was the last thing I worked on before I went off to the White House. After I came back to acting, I did the last season of “How I Met Your Mother” and I got a call about “Bhopal” and was told that that it was still wrapping up post production. They said that there was a lot of special effects in the last 15 minutes of the film and that I was going to be needed to come in and do some ADR, as they worked on their final edits. As of about six months ago, we knew that there was going to be a release date and they secured distribution.

MG: Tell us about your character Motwani and how you prepared?
KP: I did a bunch of research and read up a lot on the disaster. I spoke with the writer to find out what percentage of the character was fictionalized and adapted and what was real. My character as it turned out was one of the aspects that was largely fictionalized. The way that Ravi (Kumar) wrote the character was a lot broader. So my first question to him was that should I call the journalist that my character was loosely based on and try and talk to him. He told me “No, I want your character to be much broader from the start of the film”. He is this sort of larger than life gossip columnist that no one in town trusts because he keeps writing nonsense because it will sell newspapers. But over the course of the film, he is trying to warn the town of an impending gas leak in this factory and of course, nobody believes him. I thought it was a really layered role and a very well-developed character. So I mostly relied on the writer a lot instead of the historical context.

MG: What was it like shooting on location in India?
KP: It was awesome. I had only shot in India once before and that was for “The Namesake”. This movie we shot in Hyderabad and Mumbai. It is very different to shoot there. Kind of the biggest shocker for me was that actors would work on a couple of movies at the same time. They are shooting Monday and Tuesday on one movie and a second one on Thursday. It is a bit chaotic but in a really cool different way. It was a good learning experience. It also makes it a more dynamic environment when shooting on location.

MG: Do you think/hope that the film will bring more awareness to the event?
KP: My biggest hope going into the movie, even before we shot it, was that we do justice to the events that happened. It is an incredibly complex series of events and there are still people alive today that are living with the effects of what happened. Neither Union Carbide nor Dow Chemical ever actually apologized for what happened. It is also still not cleaned up in fact and the factory is still lying there empty. So if a fictional adaptation can get the conversation started and maybe even helps these people, then yeah I think that is great. But even beyond that, we did a screening in New York and it was interesting to hear people leave the screening that didn’t know that this was based on a true story. It really sparked some great conversations.

MG: You have done a mix of film and TV within genres of comedy and drama; do you have a personal preference?
KP: I love doing both. I hope that I am lucky enough to continue doing both. My fans have been really kind to me and I love them for it. To be able to go and do a stoner movie and then turn around and play a doctor is awesome. That is what I love about being an actor, I really enjoy playing all different kinds of characters. If I can continue to do that then I will be one happy person.

MG: Do you think we will ever see the return of Harold and Kumar?
KP: I would be happy to do as many as they will let me do. I would do “Harold and Kumar 58” when I am 102 years old [laughs]. Kumar is so much cooler than I will ever be in real life.