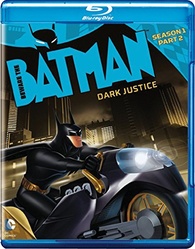 “Beware the Batman” is a great but short-lived show that was a unique take on the world of Batman because it didn’t feature classic villains like The Joker, Penguin, Riddler, etc. This series focuses on new villains and went bigger with the villains. It is quite risky but I really dug it.I loved the CGI animated approach. The design was cool and the tone of the show really intrigued. “Beware the Batman: Dark Justice – Season 1, Part 2″ includes the remaining 13 episodes in the series and if love a different take on Batman, check it out!

Official Premise: Another night falls in Gotham City and the ever-vigilant Dark Knight watches over his city and its citizens. With the help of his ex-secret agent butler, Alfred, and sword-wielding assassin Katana, the Batman wages a tireless war against Gotham’s twisted criminal underworld. Ride along as Batman battles the evil machinations of Professor Pyg, Magpie, Mister Toad and criminal mastermind Anarky. It’s a crime-fighting collection of hidden clues, cool tech and detective thrills as Batman prowls in the shadows, ready to deliver action-packed excitement and justice.

Thanks to Warner Archive Collection, this series is making it’s way on Blu-ray and completing the series for the fans that did follow this show. The 1080p transfers work perfect with the animated style. The colors are sharp and makes this slick show look great. The DTS-HD Master Audio 2.0 surround tracks work great as well with the action and score. There are no additional special features included on this release. 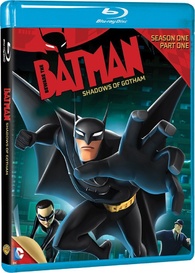 After “Batman: The Brave and the Bold” although a fun show, but with the success of “The Dark Knight” series, fans were looking for something with a darker tone. Enter, “Beware the Batman”. The show has a more serious tone and a really snazzy look and feel to it. The animation style is great and Batman is quite badass. Unfortunately Cartoon Network did not give this show much love, they pulled it from their schedule back in October after 11 episodes and left two unaired. They claimed it would be back on in January but as we approach March there is still no word. Either way I really dug this show and I would recommend it to any Batman fan out there. “Batman: The Animated Series” still holds the reigns but it is quite an impressive entry for the Caped Crusader.

Batman swings into an exhilarating new age, teaming with a powerful allies old and new for a thrilling new take on the classic Dark Knight franchise in Beware the Batman: Shadows of Gotham, Season 1 Part 1. The new action-packed detective thriller incorporates Batman’s core characters with a rogue’s gallery of criminals as the Caped Crusader faces some of Gotham City’s most despicable villains. Through the show’s first 13 animated adventures of this two-disc collection, ex-secret agent Alfred and lethal swordstress Katana join Batman to takes on an array of evildoers including the likes of Anarky, Professor Pyg, Mister Toad and Magpie. This thrilling series redefines what we have come to know as the “Batman show” and is sure to excite fans with cutting-edge CGI visuals.

This Blu-ray contains all 11 episodes that official aired and the additional 2 that are still unaired. Included are “Hunted”, “Secrets”, Tests”, “Safe”, “Broken”, “Toxic”, “Family”, “Allies”, “Control”, “Sacrifice”, “Instinct”, “Attraction” and “Fall”. There are some solid villains as well in these episodes including Professor Pyg and Mister Toad, Cypher, Magpie, Anarky and Lady Shiva to name a few. I think it was a brave move to include some new and not so well-known villains. Other shows have done in the past having Joker be the lead villains and who doesn’t love the Joker but you have to give it to “Beware the Batman” for being ballsy here. I am sure if this show continued on we would see the funny man pop up surely but we did not rely on it from the beginning.

This Blu-ray comes from Warner Bros’ made-on-demand (MOD) service, Warner Archive, which produced their releases as they are ordered. I feel that this series deserves more than that but at least it is seeing the light of day. The 1080p transfer works well with the tone of the show and the killer CGI visuals. There are no special features included on this release unless you count the two unaired episodes. I hope that Warner Bros and Cartoon Network continue this series this Spring otherwise, this “Season 1 Part 1” Blu-ray will not have a “Part 2” release to complete it.

I was attracted to this movie due to the reference to gonzo journalism in lieu of Hunter S. Thompson. I was hoping this was going to show aspects of that but unfortunately this is really masked as a cheesy teen-high school comedy/drama. It starts off actually really strong but then gets very sappy and about half way through loses me entirely. I particularly drew tired of Ezra Miller weak attempt to impersonate Hunter S. Thompson’s persona in the beginning of the film, though he completely loses it also half way through the film.

The plot follow rebel Gonzo (Ezra Miller) who decides to start his own underground newspaper focusing on the underdogs when he is kicked out of the school paper by its editor Gavin (Jesse McCartney). He teams with Evie (Zoe Kravitz) and the rest of the school’s rejects to attack the popular kids, take them on and start a revolution.

The acting is weak in the film. Like I mention Ezra Miller overacts quite a bit. Zoe Kravitz is only acting because her father is Lenny Kravitz. Jesse McCartney is laughable and should stick to his singing career. The sound in the film is really poor and seems like the cast is screaming right into their microphones. Overall watch the first half of the film for sure and then break out your phone and hit the Angry Birds while watching the second half.