To celebrate the release of “Life After Beth” starring Dane DeHaan, Media Mikes is excited to giveaway one (1) copy of the film on Blu-ray to our readers. If you would like to enter for your chance to win one of this prize, please leave us a comment below or send us an email with your favorite zombie movie. This giveaway will remain open until October 24th at Noon, Eastern Time. This is open to all of our Media Mikes readers worldwide. One entry per person, per household. All other entries will be considered invalid. Media Mikes will randomly select winners. Winners will be alerted via email.

Zach is devastated by the unexpected death of his girlfriend, Beth. But when she miraculously comes back to life, Zach takes full advantage of the opportunity to share and experience all the things he regretted not doing with her before. However, the newly returned Beth isn’t quite how he remembered her and, before long, Zach’s whole world takes a turn for the worse. 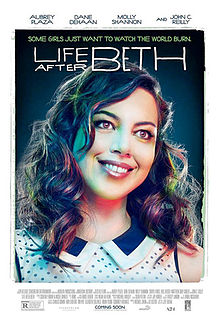 Zac Orfman is in mourning. His girlfriend, Beth Slocum, has died. Bitten by a snake while she went hiking alone, all Zac has now are his memories. And a scarf of hers, given to him by her parents (Reilly and Molly Shannon). His family, especially his older brother, Kyle (Matthew Gray Gubler), are insensitive to his feelings, mocking him for wearing the scarf around his neck. Upset he picks up a tray of Jello and heads over to the Slocum house, hoping to share his grief with those that will understand it. When Mr. Slocum is leery about letting him in he does a little investigating. And in the attic he discovers…Beth?

Not sure if this term has ever been used before so I’m going to call “Life After Beth” a very original “Rom-Zom-Com,” which translates to Romantic Zombie Comedy. Though the Slocums won’t like the word “zombie.” They prefer resurrected. Either way, Beth is back. As played by Plaza, she is unaware of her circumstances, conscious only of the things she knew before she died. Like she has to study for a test. This is how her parents keep her out of sight. When Zac discovers the situation he is sworn to silence, promising to never let Beth know of her circumstances. However, that’s a lot easier to promise than to actually do.

The cast is given some great situations thanks to a sharply written script by director Baena. This could have easily been a parody film or, if you felt for one minute that the cast wasn’t buying in, a disaster. But the actors maintain their characters and the various situations that they find themselves in only become funnier because of their commitment to the subject. DeHaan, who has always played brooding young men shows like “True Blood” and films like “Kill Your Darlings” is quite adept at physical comedy (as is Plaza) and does a fine job here. Reilly and Shannon do their best work together, arguing about what Beth can and cannot do and denying to themselves that something odd has happened. Plaza shines as Beth and her dedication to the role is what makes the film work so well. When Zac meets an old female friend Beth goes into a jealous rage, much worse than usual seeing as that she’s a zombie. As things (and Beth) begin to deteriorate the laughs continue. Yet, while you’re laughing you can’t help but feel sorry for all involved.

That being said, take a chance and go see what is now my favorite ROM-ZOM-COM!