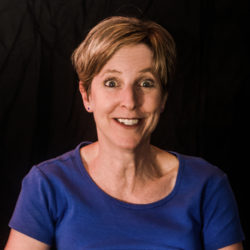 I’ve known Sandy Bernstein for over three decades.  We met at a backyard party her boyfriend at the time was holding in the fall of 1984.  She was cute, friendly…and funny.  I’m happy to say that 34 years later she hasn’t changed.

At age 50, she threw her hat in the ring of stand-up comedy and is quickly climbing the ladder of funny.  She recently achieved her dream of performing before a packed house on the main stage of the Washington D.C. IMPROV and she killed!

Sandy recently took time out from her schedule to chat about her career.

Mike Smith:   What made you pursue comedy at this stage of your life?

Sandy Bernstein:   Interesting story behind how I decided to get into comedy. I was 53 years old, and had never even considered it. There was no way I thought I could do it, so it wasn’t even an option.

I am a writer/editor in the marketing department of University of Maryland University College. My team handles internal clients, like Human Resources and Diversity Initiatives. In summer 2014, HR decided they wanted to do a talent show and needed my team to promote it. I attend all the kickoff meetings with my boss, and at this meeting, I made a wise crack: “I have the perfect headline. ‘Who Wants to Commit Career Hari Kari?'” One of the organizers of the talent show said, “That’s it, I’m signing you up to do stand-up!” I started to object, and my boss said, “Sandy, you need a stretch project for your performance review.” I said, “Fine, when I go down in flames, you’re going to have to be the one to write the Performance Improvement Plan.” So I guess you could say I did it on a dare.

There were difficult things going on in my life at that time. My boyfriend (now husband) was undergoing chemo and radiation for Stage 3 colorectal cancer, and my mother was in a nursing home, dying from Alzheimer’s Disease, so I was having a lousy year. I figured this would either be a welcome distraction or the cherry on top of my shit sandwich. In any event, I figured, WTF.  I was looking at it as a one-shot deal. You know, one and done.

I was terrified. But having worked there for seven years, I had a lot of material. I put together a PowerPoint to run in the background. The first slide was my head on Mylee Cyrus’s body, because I had a joke about twerking at the talent show. I figured if that didn’t get them laughing, nothing would. So I practiced relentlessly for several weeks. My poor husband had to hear it over and over again. He said he preferred chemo.

So the day of the show came, and the second I stepped on stage, before I even said a word, people were laughing hysterically, because they had already put up the Mylee Cyrus slide. I probably had one of the best sets of my life, and I’ve been chasing that pink cloud ever since. Now I know how junkies feel. Before I even left the stage, I was thinking about where I was going to get my next fix. People were coming up to me afterwards asking me how many years I’d been doing it. I was blown away. I actually have a video of that set, along with talent shows from subsequent years, on my website, www.sandybernsteincomedy.com.

The rest is history, but it took me a while to get going. My mother passed away in November of that year, and my husband had finished his treatments and surgeries. (BTW, he has been cancer-free for four years now.) So in January 2015, I took a course at the DC Improv called “Five Minutes to Funny,” taught by Chris Coccia. It was on five or six consecutive Sundays, culminating in a graduation show on the main stage of the Improv. Chris had done a great job with us, and we all ripped the room. From there I started doing open mics once every week or so, and some showcases for new comics. I had heard that you needed to go up at least three times/week if you wanted to progress, but with a full-time job, I couldn’t even fathom doing that. But by that summer, I felt kind of stuck. There were some comics who seemed to be making remarkable progress, and one of them turned me on to The Fat Doctor. He was one of only four comics to make Richard Pryor’s top four comedians list. After dealing with some health issues, he focused on training other comics. He has taught, mentored, wrote for, and/or influenced comedians such as Martin Lawrence, Patton Oswald, Tommy Davidson, Wanda Sykes, and Dave Chappell,  just to name a few.  I have been studying with him via Skype sessions since September 2015. In January 2016, I resolved to get on stage at least twice a week. I figured out how to make it work while working full time. I ended up getting out a minimum of three times a week, sometimes more, and only then did I feel like I was starting to make progress.

MS:  With some of the comedians out there today, your comedy could almost be called “tame.”  Was that a decision going in or did you just find that it suits your style better?

SB:  Tame is in the eye of the beholder. I just did a Jewish-themed comedy show where I kept it PG-13, but my references to sex and body parts did not go over so well. Even though my stuff could probably fly on late-night TV, it definitely isn’t tame enough for many clean comedy shows. I’m actually trying to work cleaner!

MS:  First joke you ever told – not on stage but in your life?

SB:  I’m afraid I don’t remember. I was very shy as a kid. I have an older brother, and he was the one to make all the jokes growing up. He’s my biggest fan.

MS;  First time you told a joke on stage and nailed it?

SB:  From our work talent show –  “Apparently, twerking is frowned upon in this organization.”

For Sandy’s appearance schedule, check out her website, www.sandybernsteincomedy.com

To check out Sandy’s performance at the Washington D.C. Improv, click HERE