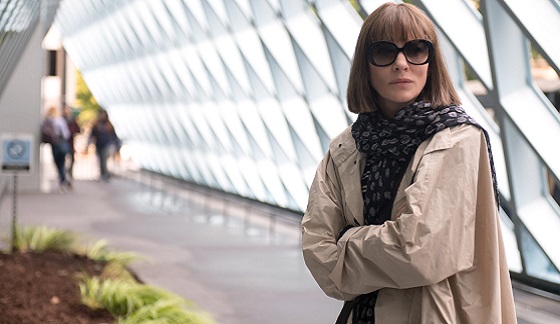 The question that has haunted America for decades now is where did Jimmy Hoffa go? Rumor had it once upon a time that he was buried in the end zone at the New York Giants old football stadium. If it were true, then it’s too bad that the much-delayed comedy/drama “Where’d You Go Bernadette” was not buried with him under a ton a concrete. Based upon the 2012 novel of the same name by American novelist Maria Semple, “Where’d You Go, Bernadette” wanders aimlessly for over two hours and establishes no real emotional connection with the audience. Despite a talented cast, and a long list of cameo appearances and small roles by recognizable faces, it’s not enough to save its unremarkable script and direction by Richard Linklater (“A Scanner Darkly”).

Bernadette Fox (Cate Blanchett) is an agoraphobic mother of a teenage daughter and was once a trailblazing architect in Los Angeles. Since moving to Seattle with her husband and tech entrepreneur Elgie Branch (Billy Crudup), Bernadette has isolated herself in their home, created from an abandoned church, and devoted all her time to their daughter, Bree (Emma Nelson in her feature film debut). Not only does she refuse to make friends with her closest neighbor, the nosey Audrey Griffin (Kristen Wiig), but she also does whatever she can to make Audrey’s life miserable. The only other interaction she has is with an unseen assistant named Manjula to whom she assigns all sorts of tasks via text messaging.

We eventually learn more about her past successes, which is where cameos by Laurence Fishburne, Steve Zahn and Megan Mullally come into play, but by the time it does we don’t care. The greatest failure of any story is the inability to hook the audience within the first sentence/paragraph of a book or the first couple minutes of a film. If this doesn’t happen then it’s a monumental task indeed to get the audience to ever give two cents. This is exactly the case with “Where’d You Go, Bernadette,” which was originally supposed to be released in the spring of last year. There are brief glimmers of something serious going on with Bernadette’s character, and Blanchett is terrific at fleshing them out, but it’s all overwhelmed with one-dimensional characters around her, boring dialogue, and predictable, Disney-like comedy.

With their marriage on the rocks because of her hatred of all things, including Seattle, and facing near-financial ruin thanks to a scam, Bernadette freaks out and instead of facing her problems flees to Antarctica where they were supposed to take a family trip. The question is – will the experience turn Bernadette back into being a creative force in the architect world, or will she disappear like so many doomed Antarctic explorers at the dawn of the 20th century? Truth be told, the answer doesn’t matter.

In conclusion, if you want to be scratching your head wondering where this film is going, while also having to listen to needless and distracting voiceover narration by Nelson, then “Where’d You Go, Bernadette” is the story for you. I think Mr. Hoffa would agree.