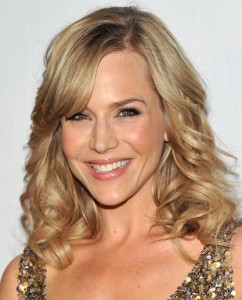 Julie Benz is currently co-starring in ABC’s new series “A Gifted Man”. She is also co-starring in TNT’s upcoming Mystery Saturday Night film, “Sandra Brown’s
Ricochet”, which airs November 30th. Julie is also know for her recent roles on the TV series’ “Dexter” & “No Ordinary Family” and films like “The Boondock Saints II: All Saint’s Day”. Media Mikes had a chance to chat with Julie about her new TNT movie and what we can expect from her role.

MG: The character of Elise is a little mysterious and a little bit of a trouble maker; what did you like most about playing her? And how did you prepare for the role?
JB: What I loved was how for me with the challenge of playing Elise was how close she keeps everything inside and you don’t know if she’s good or bad and you’re never sure exactly what she’s thinking and that was a real challenge for me to play. I had to work really hard on an accent. So I worked very hard on my accent for the movie as well and that helps me really get into Elise. With that specific type of Southern accent she moved slower and talked slower than I do and that allowed me to actually be a little more serious.

MG: Did you consider the role to be challenging overall?
JB: No. I mean it was challenging to play but it wasn’t difficult in the fact that I mean I understood what her intentions were sure. I mean the way she got around to doing stuff wasn’t necessarily all that normal. But in her heart everything like her intentions behind it all was pure. So but you had to actually admit too she’s a little crazy for what she did.

MG: How do you feel the film different from the book?
JB: I think it does an amazing job of adapting the book into the movie. There’s so much information in the book and you get a lot more back story but the film itself follows the action quite specifically.

MG: You are quite involved with your social media, how has that been playing into the promotion of projects like “Ricochet” for you?
JB: Oh I mean it’s always so great. TNT puts up a new promo for the show I can just Tweet it and everybody goes and looks at it. I love social media. I think it’s a great way to not just promote the work that you do but also to have direct contact with fans and are able promote any kind of charities that you’re involved in.

JB: With “Ricochet”, what do you think it is that will draw viewers in?
JB: You know, first the story. The story is really compelling in the way that it’s shot. It is very much as a film and then of course I mean you have John Corbett and Gary Cole, so what’s not to watch?

MG: Well you just mentioned Gary Cole he’s always such a fascinating actor. What was he like to work with?
JB: Oh he’s the pro man. He is this ultimate gentlemen first and second just a pro. Just watching him grasp his character and making the choices that he made to play Judge Laird, it’s like being in a master class watching him work.

MG: Okay now also recently after you spent so much time on series work like “Dexter” and “Ordinary Family” and now “A Gifted Man”, how was it different to work on a film with a set beginning, middle and end?
JB: Well it’s a little overwhelming at first because we shot it in 18 days. So it’s a pretty fast process and pretty fast filming. So you have to really do a lot of homework before you arrive on set and really do a lot of your character development before you get there. Rather than when you are in a TV series they start kind of crafting the role for you and they start writing it in your voice after you’re cast and tailoring it to who you are. I love doing television because I love being on set everyday with the same people. So it’s sad when you have to say goodbye.