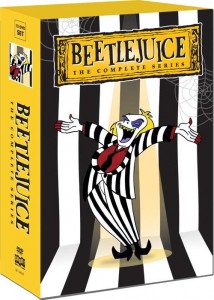 It’s Showtime! I absolutely love “Beetlejuice”! I grew up watching the film, which scared me as a kid. Which then led me to race home each day from school to enjoy the animated series as well. The show had a different tone than the film but was and has been one of my favorites. This is the first time that the animated series has ever made it onto DVD as a complete series, thanks to Shout! Factory. There were three episodes, “A-Ha”; “Skeletons In The Closet” and “Spooky Boo-tique”, included on the 20th Anniversary DVD of the film. It was enough to get our mouth watering but left us wanting more. Well we finally get our prayers answered here but it is not the ultimate release that I was hoping for.

Official Premise: This quirky series was based on the highly popular 1988 Tim Burton film of the same name. Beetlejuice: The Complete Series features the escapades of Lydia Deetz, a teenage goth girl with a love of all things macabre, and her best friend Beetlejuice, an undead, bug-eating prankster from the Netherworld. The only way Beetlejuice can visit the Outerworld (also know as the town of Peaceful Pines) is when his name is repeated three times, but unfortunately for him that is the same way to send him back!

This Saturday morning cult favorite cartoon has been long-awaited on DVD. This release features all 94 episodes in a 12 DVD box set and is available only from Amazon.com. When revisiting this show for the first time in years, it is better than ever and I enjoyed it still like when I was a kid.  In fact, I actually enjoyed it more with its witty dialogue, tongue-in cheek humor and satire-filled plots.  There were so many great nods to the horror genre. I also forgot how short the first three seasons were while the show was on ABC Saturday mornings.  The first was only 13 episodes and the second and third were 8 each.  When the show switched to Fox Kids, they really gave the series some life with 65 episodes in the fourth season.

The release itself was a bit of a let-down though.  Firstly there are no special features at all included.  I was hoping for something…anything for us fans to dig into but was left unsatisfied.  The slipcase is a little bit flimsy and feels cheap.  The episodes are spaced out in three DVD cases separated with Seasons One, Two & Three in one case and Season Four Part 1 & 2 in the other two. It is great to see the episodes again but they don’t look the greatest. They look like that are from the early 90’s, which they are obviously but I was hoping that Shout! would have done a little bit to restore some of the quality. In fact, some of the episodes actually even look downright blurry. But at least we finally have the complete series right?