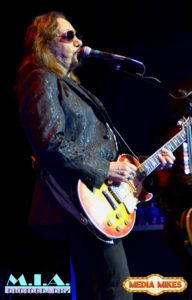 Rock and Roll Hall of Famer and former Kiss guitarist Ace Frehley made a stop at the F.M. Kirby Center in Wilkes Barre, PA on April 15th, as part of a 12 show east-coast run promoting his latest album release titled “Origins Vol.1” The night was a series of ups and downs which at one point had the near capacity crowd on their feet cheering and the next moment had them scratching their heads while leaving the theater to a slow din of boo’s.

Being a huge fan of Ace I was certainly well aware of the fact that when it comes to the “Spaceman” you never know what you are going to get and, this night was certainly a testament to that. The show kicked off with the NYC based band KillCode whose modern rock tinged sound was met with a warm response from the Wilkes Barre. This could have been attributed to the fact that one of the bands guitarists was from the rural esque town or possibly that their performance was the most consistent of the night. Either way the band seemed well rehearsed and fit the opening slot well. After a brief set change and following the sounds of “Fractured Mirror” which played over the P.A. Ace and his band consisting of drummer Scot Coogan, guitarist Richie Scarlett and bassist Chris Wyse would take the stage. The group kicked off the set with one of Ace’s signature songs “Rip it Out” which gave way to several Kiss classics such as “Rocket Ride”, “Parasite” and “Love Gun”. It was at the start of “Parasite” that I began to notice that the night was in for an awkward turn. The songs tempo shifted back and forth as it seemed Ace and the rest of the band were clearly on separate pages. Thankfully after a bit of back and forth things leveled out and songs like Thin Lizzy’s “Emerald” and “Rock Soldiers” sounded great. Towards the end of the bands set Ace began to move less and less and at one point he was even sitting on one of his speaker cabinets. After a lackluster solo and his signature smoking guitar trick the band quickly ran through the Kiss/Ace staple “Cold Gin” before immediately leaving the stage. Previous shows on the tour featured a two song encore which the fans were anxiously waiting and cheering for. After several minutes the house lights came fully on and music began playing over the P.A signaling the show was over. As fans made their way out the doors loud boos and other un-pleasantries filled the air. With a set a set that ran just under 90 minutes there was certainly cause for such reactions.

Fast-forward about 12hrs. to when it was announced that immediately after the Wilkes Barre show Ace was rushed to a nearby hospital and treated for exhaustion and dehydration. (As a side note the last show of the tour scheduled for 4/16 was canceled) I understand people get tired and things happen but when you are at the level Ace is at and have been performing as long as he has shouldn’t steps be taken to prevent these types of avoidable occurrences? Especially on a tour consisting of only 12 dates! This however is the typical type of Ace behavior which partly makes him so entertaining yet which has also plagued his career since his early days in Kiss. Will it ever change? That’s very hard to say. What I can say is that on 4/15 Wilkes Barre was treated to classic Ace all the way.