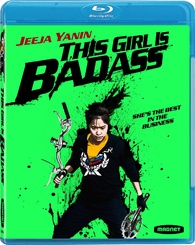 When it comes to Thai action films, I have been grabbing them up whenever I could after “Ong-Bak”.  “This Girl Is Badass” is even from the director of “Ong Bak”, Prachya Pinkaew. Like how Prachya discovered Tony Jaa, he also brought us  JeeJa Yanin.  She was awesome in “Chocolate” and the title of the film suits her quite well. Did I mention that she is also only 5’2? Unfortunately this film is not one of my favorites, it plays more like a slapstick comedy, which is not funny, with a few decent action scenes chucked in. Unless you are a hardcore Thai martial arts fan, then I wouldn’t rush out to watch this one.

Official Premise: Witness jaw-dropping fight sequences from “Chocolate’s” kick-ass Jeeja Yanin, who also stars in the sequel to the martial arts hit, “The Protector”. In This Girl is Badass, Jeeja takes her skills to the next level as a bike messenger who is hired by competing mob bosses to smuggle goods. Caught in the middle and given an ultimatum, the only way out is a confrontation erupting into a battle of bullets, face kicks and blows.

“This Girl Is Badass” looks decent on Blu-ray but nothing spectacular. The 1080p transfer is relatively clear and consistent. The audio tracks are must better in terms of Blu-ray quality. First there is a Thai: DTS-HD Master Audio 5.1, which works well with the action. Normally, the dub tracks are terrible but since this film is already bad the English track works in its favor. The special features are also a let down with a short featurette “The Making of This Girl is Badass”, only in SD and in Thai, with English subtitles. There is also an even shorter “Behind the Scenes” including additional b-roll footage, also in SD. Lastly there is an International Trailer included.

Garrett Brawith is the producer/director of the upcoming film “FDR: American Badass!”. It is a hysterical comedy starring Barry Bostwick as FDR, as his battles Nazi werewolves. Sounds crazy right? Well it is! Media Mikes had a chance to chat with Garrett about this film and what we can expect from the Blu-ray/DVD release this Fall.

Mike Gencarelli: What was the craziest experience you had working on “FDR: American Badass!”?
Garrett Brawith: The whole shoot was crazy! But there was a day where Bruce McGill and William Mapother had to play an entire dramatic scene standing over a naked man with a squirrel sticking out of his rectum. We’d all agreed not to look because frankly, dead rodents and back balls in your face can be distracting. They pulled it off like pros, but I hear they’re both in therapy now. Talk about dedicated.

MG: How did you get such an amazing cast lined up for this film like Barry Bostwick, Lin Shaye, Bruce McGill, Ray Wise and Kevin Sorbo?
GB: Our amazing casting directors, Dean Fronk and Don Pemrick helped talk them in to it, but with our movies “Poolboy, Drowning Out The Fury” and “Darnell Dawkins, Mouth Guitar Legend” coming out, they knew what they were getting in to; no-holds-barred insanity. And to their credit, they were all for it. Even actors of their caliber enjoy coming to set and just letting loose.

MG: So we got werewolves, Nazis and over-the-top racism is anything safe in this movie?
GB: No. On purpose. But I did wear a condom the entire time. Does that count?

MG: The film crosses over onto Jim Abraham/David Zucker ground via “Airplane!”, tell us about your decision to take the film that way?
GB: It often feels like everything has been done. “The Airplane” and “Naked Gun” series changed all of that by taking normal comedy and going way too far with it. I wanted to go even further. No apologies, no pulled punches, I’d like to kick the planet in the nuts and make them salute the flag at the same time. God bless America.

MG: How did this experience differ for you than your film “Poolboy”?
GB: “Poolboy, Drowning Out the Fury” was an experiment in mass comedy. We wanted to fill every second with something to make you laugh and honestly, I think we did it. FDR is a classier, stylized version, but without the class. The film looks great but it’s anything goes. We took the same philosophy as “Poolboy” and just went bigger.

MG: Tell us what we can expect from the upcoming DVD/Blu-ray release?
GB: We wanted to do something nice for the audience so there’s a special feature, 26 minute music video of me peanut butter wrestling the cast in lifesaver thongs. Because we care. Comes out September 25th, so look for it!