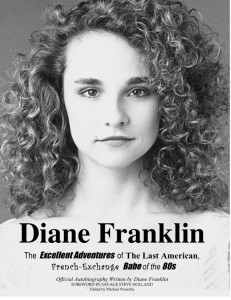 If you grew up in the 80’s and watched movies then you know who Diane Franklin is. If you were a teen guy (or a girl) you most likely had a crush on her. Her first film role was “The Last American Virgin”, which started her career as an 80’s icon. From there she took on roles in film like “Amityville II: The Possession”, “Better Off Dead”, “TerrorVision” and “Bill & Ted’s Excellent Adventure”. These films were a big part of my life growing up. They are also all pinnacle films of the 80’s. This book is a real treat for anyone that is a fan of these films and are looking for an inside look into Diane’s career and life. When I recently spoke with Diane about her book, read here, she told me that she wanted to do this in a way to preserve her experiences and stories on these films for herself, her family and also her fans. It is great reflection of not only her films but also her life outside film.

“Diane Franklin: The Excellent Adventures of the Last American, French-Exchange Babe of the 80s” was self-publishing by Diane herself and is currently available for sale only on Amazon.com and for download to your Kindle devices, click here to purchase. This book is very personal and reads like a friendly conversation. It goes into a lot of Diane’s personal experiences. She includes a lot of great personal photos as well. My favorite part of the book though is how accessible it is. I am a big fan of “Better Off Dead”, so instead of searching through the whole book for what she wrote on that film in particularly, she has set up the book with chapters based on each film. So there are chapters on her films like “Last American Virgin”, “Bill & Ted”, “Better off Dead” etc. This is a very smart idea and a great selling point for the book. Maybe you don’t give a crap about “Amityville II” but you love her in another film. People can go directly to that movie and still enjoy the book.

Speaking of “Amityville II”, we all know Diane’s role in that film is a bit risqué. She goes into a lot of depth about that film as well in the book and fans of the film are going to LOVE IT! But speaking of risqué, Diane has actually rated each chapter dealing with her films, so some are rated PG-13 or rated R etc. So if you are a parent it will inform you on how mature each chapter of the book would be for your kids. It is not very graphic but the subject matter is more mature in the rated R chapters. This is a very unique book and one of the most interesting memoirs that I have ever read. Diane really goes back in time and relives these events and brings these wonderful stories for us to enjoy. What I also love is that the stories don’t stop with her 80’s films it goes into her early life as well and her life before and after she became an 80’s icon. It is very honest and engaging. If you are looking for a very quick, easy and fun read…then be sure to pick this up!