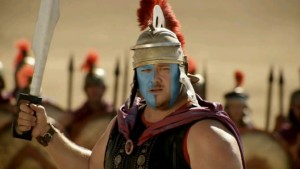 Recently when I see that a film that is presented by National Lampoon, I would steer clear. It definitely doesn’t have the same reputation it did back in the “Animal House” and “Vacation” series days. This film is different though and delivers some really funny laughs.  Don’t get it wrong it is stupid as shit but for some reason I found it entertaining, probably few will agree.  It also packs a reallygreat cast including Will Sasso, Ian Ziering, Kristanna Loken, Sophie Monk, Rip Torn and Tony Cox. Will Sasso is just so over-the-top, it is great and makes me count down the days till “The Three Stooges”. Ian Ziering known best for his role in “Beverly Hills, 90210”, really branches out playing the mighty warrior Testiclees…yes that’s this name.

In case you are wondering about the director, Jeff Kanew, he is known best for directing the classic comedy film “Revenge of the Nerds”. In case the cover art doesn’t describe it enough this film is a spoof of films like “Gladiator”, “Troy”, “Alexander” and of course “300”. The film is very raunchy and most of the jokes really land on their feet. If you are a fan of Will Sasso, then there is no way you won’t like this film as he gets a chance to shine in the starring role.

The Blu-ray presentation is decent but nothing special. The video looks clear and sharp. Though the audio track is lacking and is basically the equivalent for DVD standards. The special features are non-existent with only the theatrical trailer included. There is also a the bonus trailer for the another spoof film “Division III: Football’s Finest”.  Disappointing since this is a really funny film.  Would have loved to see a gag reel or at least some behind the scenes featurettes.