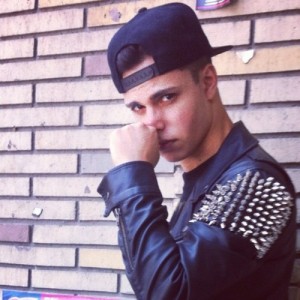 Thomas Augusto is a member of the pop group Midnight Red. The group has recently released a new single titled “Hell Yeah” and Media Mikes had a chance to talk with Thomas about the single and the groups plans for the summer.

Adam Lawton: Can you tell us about the formation of the group?
Thomas Augusto: I first met Eric Secharia about 5 or 6 years ago. He at the time was living in California and I was living in Texas. Eric had started to put a group together with Anthony Ladao and they called me to join them. From there we found Colton Rudloff by searching “kid that can sing” on YouTube and, from there we had found Joey Diggs through a mutual producer. That was pretty much the formation of Midnight Red.

AL: What was it like when you all first got together in the same room for the first time?
TA: I think we were all measuring each other up. There was definitely no tension but we were trying to figure out what each other was about. We had actually met Colton and Joey on the exact same day. We took some time to get to know each other but once we were Midnight Red things were effortless.Everything blended together well and it seemed meant to be.

AL: What is the group’s writing process like?
TA:  There is a mixture. Some of the things we write on our own and some of it is written as a group. Anthony is a very talented producer who makes some great beats. We usually will just bring all of our ideas together and go from there.

AL: Can you tell us about the new single “Hell Yeah”?
TA: We recorded “Hell yeah” in Paris with Red One. It was just a blast! It’s a really cool song that we all like. The song fuses several genres in to one. There are some huge pop elements in the song along with dance elements and hip-hop elements. There is a guitar riff in the song that almost reminds me of Red Hot Chili Peppers.

AL: How did the idea for the song come about?
TA: “Hell yeah” was actually created by Red One and his team. We first heard the instrumental portion of the track before it was even done being made. There was a portion of the chorus done but when we heard it we just started exchanging ideas.

AL: Can you tell us about the bands EP?
TA: The EP is currently available on ITunes and was something we put out to help promote us out on the roadduring our tour with New Kids on the Block and The Backstreet Boys. We worked with Red One on that as well and it was a really fun project. We recorded it in Los Angeles and performed a number of the songs while we were out on that tour. The EP gives fan a taste of what they can expect from the full length album.

AL: What are the bands plans for the rest of this year?
TA: The full length album will be out towards the end of this year. We also will be touring and doing a lot of radio promotion.