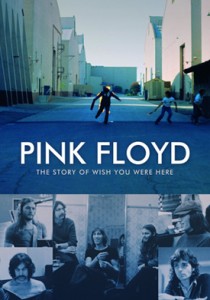 “If you look long enough into the void, the void begins to look back through you.” ~ Friedrich Nietzsche

For the entirety of its 85-minute running time, “Pink Floyd: The Story of Wish You Were Here” finds the Floyd looking into multiple voids: the band’s disillusionment with the music industry after attaining mega-success with 1973’s “Dark Side of the Moon”, the increasing angst and conflict between the group’s individual members, and – perhaps most substantially – the void in the eyes of their former band leader, Syd Barrett, who had left the group in 1968. It’s an absorbing story to be sure and the documentary manages to capture the internal strife as well as the creation of an album that would defy the odds and become just as much of a classic masterpiece as “Dark Side”.

“Story” bookends itself with a live performance of “WYWH”s title track from Live 8 in 2005. There’s no voice-over narration but, rather, title cards that serve to transition the viewer back into Pink Floyd’s formative years – and it’s choice that serves the film well given the number of interviewees it presents. Rightly, the main story begins with the tragic tale of Syd. It’s a heartbreaking tale of a brilliant musician and true visionary wearing out his welcome with random precision due to his succumbing to the lure and excessive usage of brain-frying psychedelic drugs that were part and parcel of late 60’s culture. By the time the film shows its final picture of Barrett, it’s easy to understand why Pink Floyd would dedicate an album to his disappearance from and lingering absence in the band.

New interviews with band members Roger Waters, David Gilmour, and Nick Mason – as well as an archived interview with the late Rick Wright – allow each to shed light on their own personal connection with Syd and how the legacy of this crazy diamond truly shines on. It’s clear that the Floyds are an intelligent lot and the interview segments featuring them are insightful and engaging. Performance segments dissect various musical passages and refrains that served as the genesis of the songs that comprise “Wish”.

“Story” also introduces us to a wide range of people who were involved in the creation of the album both inside and outside of the studio. As with the “Classic Albums” DVD series, clips featuring a producer or engineer behind the mixing desk playing isolated instrumental or vocal tracks from the multi-track master tapes are especially interesting and fun. “Story” does this via sound engineer Brian Humphries by bringing him back to Abbey Road for the first time since the album was recorded. There, we’re treated to single-track samples from “WYWH” that allow us to hear exquisite musical details that are difficult to hear densely-layered final cuts that comprise the album. We even get to hear Roy Harper’s guest vocal track on “Have a Cigar”, one which easily surpasses both Waters’ and Gilmour’s attempts to handle the singing in-house – despite Roger’s new-found belief that, had he persevered, he “could have done it better”.

The documentarians behind “Story” are savvy enough to recognize that any story about Pink Floyd that doesn’t explore the visual aspect of the band’s album artwork and concert animations would be woefully inadequate.  The film covers this topic extensively by featuring interviews with longtime Floyd collaborators designer Storm Thorgerson, illustrator/cartoonist Gerald Scarfe and photographer Aubrey “Po” Powell. Even the iconic “burning man” featured on the “WYWH”s front cover, Ronnie Rondell, shares stories about his precarious contribution to the album (as photographer Powell states, “15 times to catch on fire is rather a lot.”).

“The Story of Wish You Were Here”, despite feeling a little disjunct because of the back-and-forth nature in which it alternates between focusing on Syd and the in-the-studio work, is an excellent documentary and is essential viewing for Floyd fanatics.  In fact, it’s so well done that it would likely hold the attention of even the newest of newbies. It would have made the recently-issued 5-disc “WYWH Immersion Edition” box set all the more immersive; why it wasn’t included in that pricey mega-package is a genuine mystery.

Somewhat ironically, if there’s any disappointment to be had with “Story”, it’s the near absence of interviews with Rick Wright, who passed away in 2008. One of the highlights of the 2001-issued “Classic Albums: The Making of Dark Side of the Moon” DVD was Wright’s solo piano performances of segments from that disc – even though, musically, “Dark Side” was a David Gilmour-dominated LP. By comparison, “WYWH” is a showcase for Wright’s abilities as a composer and musician. That the timing of the production of the documentary didn’t allow it to interact with him and focus more on his contribution is a shame because – even though the album is a brilliant homage to Syd Barrett – musically on “Wish”, the correct answer to the question of “Oh, by the way, which one’s Pink?” is indeed “Rick Wright”.  The diamond that was Rick shines on just as brightly as Syd’s.