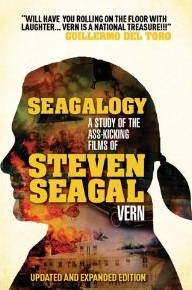 Whether like Steven Seagal or not there is just something about him that drives me crazy. Like the fan craze and “Facts” surrounding Chuck Norris (another one of my favorites), Seagal is just one kick ass son bitch. I guess I am obviously not the only one. The author of this amazing look into the career of Steven Seagal is one of our times most unique film critics and well known for his unorthodox reviewing style. He was even called “a national treasure!” from Hellboy director Guillermo Del Toro.

This book journeys through more than 30 films from the world’s only aikido instructor turned movie star/director/writer/blues guitarist/energy drink inventor…that’s right…Steven Seagal. It is both very funny and also very intelligent. You know that when you are reading this that Vern is a man that knows his Seagal and is very passionate about it. I also have never known that there was such a thing as a Seagologist but I know there is now. There is an amazing introduction from David Gordon Green, who is a one and also the director of the hilarious comedy “The Pineapple Express”.

Listen we all know that some of Seagal’s movies man not be perfect but they also do one thing kick-ass and that is enough for me. Also what is great about this book is that it doesn’t even stop at the movies, it goes deep into Seagal’s career like this famous Mountain Dew commercial to this blues records and also his real life role as a deputy police officer in Parrish County, Alabama and his work using that role in his hit TV series “Lawman” (which is an amazing show and where’s season three A&E?) So sit back and get ready to some laughs and dive into one of our time greatest “ass-kicking auteur”.