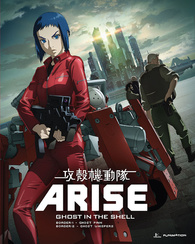 “Ghost in the Shell: Arise” is a new four-part OVA series that serves as a re-imagining of Masamune Shirow’s “Ghost in the Shell”. The OVA series features new character designs and new music by Cornelius. The series of OVAs were split into separate episodes called “Borders”. This release includes the first two titled: “Ghost Pain” and “Ghost Whispers”. Being a fan of “Ghost in the Shell” for years, this is another great series in the franchise. I can’t wait to see the second half.

Official Premise: In this highly anticipated prequel set in the year after the fourth World War, cyborg and hacker Motoko Kusanagi finds herself wrapped up in the investigation of a devastating bombing. But she’s not the only one looking for answers—as she delves deeper into the mystery of who is behind the attack, a specialized team unlike any before begins to take shape.

“Ghost in the Shell: Arise” looks stunning on Blu-ray. The 1080p transfers presented in 1.78:1 is outstanding. The animation is breathtaking and even though the characters looks a little different the series still is so sharp. The colors are so sharp and there is a nice mix of CGI elements. Same goes for the language tracks. There are both Japanese and English Dolby TrueHD 5.1, it may upset some people that this does not include original cast but I see it as new character designs, new voices. A few new start.

I was really impressed that this release included some solid special features, which are are great like the series and spanned over two discs. “Ghost in the Shell: Arise at the Anime Expo 2013” features interviews with staff and attendees. There is a feature with the robotic quadrapeds in “Logicoma Beat”. There are also a bunch of promotional videos, New Flash(s) and trailers/teasers and textless openings included.