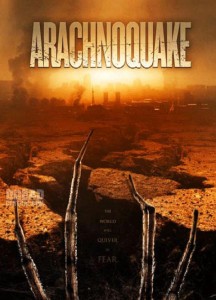 If you are a fan of SyFy, they you must be a fan of their original movies. This summer, the month of June is packed with new great films. “Arachnoquake”, Syfy’s Saturday original movie, premiered on Saturday, June 23 and is one hell of a fun ride. It stars Tracey Gold (“Growing Pains”) and Bug Hall (“The Little Rascals”) and is directed by Griff Furst (“Swamp Shark”, “Lake Placid 3”). Media Mikes had a chance to chat with Tracey, Bug and Griff to discuss the film and their experience working on it.

Mike Gencarelli: First question is for Tracey and Bug. What did you guys like most about taking on a role in a movie like this?
Tracey Gold: I’ll start. Well, I would just have to say working with the cast and crew on the movie. I think it was just one of the better productions I’ve done. It was easy. It was fun. It was well organized. Everybody got along. It was a subject matter that was obviously, liked, I mean it has albino spiders…and it was just a lot of fun and a really great group of people.
Bug Hall: Yes, I think that was definitely perk number one for me as well, you know. The cast, crew and Griff and everyone at Syfy was great. And I liked that we were all on the same page going into it. My very first question to Griff was, how funny is this thing? He was right there with me saying “We’re going to hit every moment for comedy that we have”. This thing is comedy at heart and that was to me the most exciting part was really getting to be funny and getting to just sort of run with jokes and have a lot of fun with it.

MG: Can you talk about the scene that you had the most fun with while shooting?
TG: Yes, I think the scene I had the most fun with was when we got to jump off the big boat and into the water. Then we all had to scramble up onto the ground. There were also some funny moments with it and Ethan Phillips which were hysterical and made us laugh. I like doing stuff like that when they say okay we’re not going to use stunt doubles or something, you guys can do it and I think that’s always like, just kind of so fun. Brings out the kid in us.
BH: Yes. Exactly, I’m a big kid at heart and any moment that I have to fire guns or, you know, tuck and roll, I’m a kid in a candy store and, you know, to me that is – that was the biggest appeal. A lot of the comedy stuff was – felt so good when we were finished though, you know. Like, going through it I’m always nervous because I don’t feel like I’m funny most of the time. But then as soon as it’s done, you know, you feel so good about it. I had a moment with Luck Johnson in a grocery store. I know when we were finished with the scene me and him were just elated, you know, we really felt like we nailed it and we were really happy with it and I felt like it was a big payoff. So, the comedy was a big appeal.

MG: Bug, do you feel that your nickname was factor into being cast int this film?
BH: As far as it factoring into me being cast, yes, I like to think that, it definitely played a part, right. I mean, Bug’s doing a movie about bugs. It certainly can’t hurt.

MG: Griff, you’ve been working, quite a bit with these creature features, like “Lake Placid 3” and “Swamp Shark”. What do you enjoy most about this genre?
Griff Furst: Well, I’ve always been a fan of creature and horror and sci-fi. What I’m enjoying most about is that these movies don’t take themselves too seriously. So, as long as you have actors who are down to experiment and to play with the humor in it and to kind of almost be aware of the situations that they’re in but still playing it for keeps and playing it seriously. That’s always really fun because you still get to do what you love to do but it’s all about having a good time and making sure that the audience in turn has a good time watching it as well. There’s not millions and trillions of dollars at stake and but that’s part of the fun with it.

MG: Tracey and Bug, as your co-stars in the film are huge giant bugs, what would you say is your biggest challenge working on this film?
TG: Sure, for me I had never done anything like this. So I remember when I read the script I was like, okay this is like funny, right? So it was an adjustment for me, we’re really like reacting to something that’s not there. But then that’s true acting. You get to use your imagination and that’s what made it so fun. So we had an idea of what the spiders looked like and probably in all of our heads it was slightly different. So, it’ll be interesting to actually see the way it really is. But it was a challenge and it was fun.
BH: Yes, I think the challenge of not having them there was probably more difficult than I expected going into it and it was just a lot of talking, you know. There was a lot of talking from scene to scene about what we were seeing and where it was and how big it was and what it was doing. You know, just to really kind of have that placeholder locked down and make sure we were all on the same page.
TG: To make sure we’re looking at the same thing.
BH: Right, A lot of Xs on apple boxed. But again, that was part of the appeal. It was a lot of fun just kind of letting the imagination run and really having fun with it. I can’t stress the having fun with it aspect of it enough. I mean, that was goal number one and we accomplished that.

MG: You guys have any room for any improv during the production?
BH: The cast and Griff there was, you know, it was always, you know, always open to whatever, you know, we wanted to throw out, especially with comedy, you know, you kind of have to just go with what, you know, what you’re feeling and what feels funny at the moment. And a lot of times what’s funny on the page, you know, doesn’t quite read and so you tweak it and you, you know, you bend it a little bit and you make, you know, you make the funny happen. So there was a lot of great moments where we just kind of ran and just played off each other.
GF: And also the character types that were listed in screenplays were actually quite different than a lot of the folks we ended up casting on purpose because it’s just interesting to go opposite. So we found out that, you know, there was some differences between Bug’s character and Lucky Johnson’s character so then that allowed more of this improve and kind of experimenting with their personalities and it’s not in the script, which didn’t originally call for that kind of personality. So, definitely a lot of improv.

MG: It sounded like you have a lot of fun with this obviously. Were there any times when you just kind of couldn’t keep a straightface because it’s something so silly?
TG: Many…
BH: Absolutely. Yes, especially those late nights when you’re starting to get delirious and it just really occurs to you what you’re doing. We definitely had quite a few moments of the giggle fits that had to be subsided.
GF: There’s a great blooper reel…
TG: I think that’s always fun.