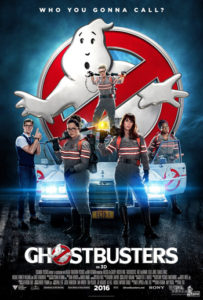 OK, let me make this quick announcement. For those of you that went out of your way to note online that a female-led “Ghostbusters” would cause, in the words of Bill Murray’s Peter Venkman, “Fire and brimstone coming down from the skies! Rivers and seas boiling! Human sacrifice, dogs and cats living together… mass hysteria,” you can come back in off the ledge. The new installment is pretty damn funny and stands as tall as the Stay-Puft Marshmallow Man.

After leading his final group through a tour of a historic mansion, a tour guide finds himself lured into the basement of the dwelling and under attack from forces unknown. The building’s curator knows he needs help but who’s he gonna call?

One part funny, one part scary and completely enjoyable, this reboot of the popular 1984 film rests squarely on the shoulders of its cast. McCarthy and Wiig have made me laugh for years and I’m happy to say they do the same here. I don’t watch a lot of television so I wasn’t familiar with the other (2) “busters”, McKinnon and Jones. Both do fine work here, with McKinnon’s Jillian the standout. She’s a combination of the original film’s Ray Stantz and Egon Spengler. The film follows the original’s plot, as ghosts begin to appear seemingly out of nowhere in New York City. Not looking for bad publicity, the mayor (Andy Garcia) does his best to keep the lid on the situation. He also opens himself up for a great “Jaws” reference, which in itself gives this review an extra half-star.

Visually the film is heads above the original. I saw the 1984 film on the big screen a few years ago and I couldn’t help but notice how bad the special effects were. Here they are spectacularly presented and downright scary. But not everything is gloom and doom. You’ll be happy to learn that many of the original film’s cast show up in cameos here, which brought applause from the audience I was a part of, especially a sly nod to the late Harold Ramis. His son, Daniel, has a small part in the film, which is dedicated to his memory.