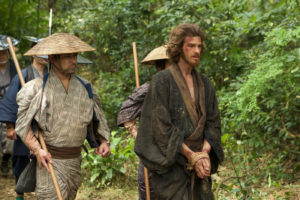 Very rarely do you have a religious piece of filmmaking that doesn’t question religion or support the existence of a greater entity. Martin Scorsese is no stranger to the topic; raising hell with “The Last Temptation of Christ,” but his latest film is a deep meditation and self-reflection on the topic. The myriad of ideas behind “Silence” are a little too insurmountable to summarize without glossing over one or two powerful and important themes. Nothing about this feels like your stereotypical Scorsese movie, which means it’s all substance and no style.

The movie follows Jesuit priests, Sebastia Rodrigues (Garfield) and Francisco Garupe (Driver). They receive a distressing letter about their mentor, Father Cristovao Ferreira (Neeson). He’s apparently committed apostasy and disappeared in post-Feudal Japan. Despite warnings about the inherent dangers of being a Christian during the Kakure Kirishitan era, a time when Christians were deep in hiding in Japan and feared being publicly executed for their beliefs, the duo head off with nothing but their faith and an alcoholic guide looking to be forgiven for his past sins.

While the first act establishes 17th century Japan, the rest of the movie follows Sebastia. There’s nothing unique about him, I guess that’s just how the cards fell in terms of storytelling and/or history. Both Sebastia and Francisco are devout men, struggling to deal with the harsh reality of potentially being murdered for their religion in a foreign land, as they watch as others are brutally slain in their God’s name, and in inherently, their names as well.

“Silence” is a struggle of morality, faith, and life. There are moments where Sebastia’s beliefs are selfish, wholesome, absurd, and compassionate. The clash of religious ideals stems from the Japanese power structure believing in Buddhism and viewing Christianity, not only as a threat, but as a toxic influence that can’t sprout in their land, which they constantly refer to as a swamp. And more frankly, the Japanese government sees Christianity as a sly form of Western intrusion and corruption. The philosophical struggles between the two beliefs don’t develop until halfway through “Silence” and that’s when they things get more profound.

We get to see the rotten and enlightened side of religion’s impact. It’s difficult to pinpoint an encompassing message in “Silence” because it plays out like a scholarly debate on faith. The three biggies in “Silence” are its reflection about how important and damning symbolism can be, it’s criticism about how humans can fetishize their own beliefs, the idols they keep close, and the images that they deem holy, and it’s praise for how religion can teach us compassion and give us silent strength when dealing with the impossible.

On a more personal level, Sebastia’s voice-over narration and internal monologue provide insight into his selfishness of wanting to be martyred much like Christ. Outside of Sebastia’s unintentional egocentric spiritual journey, it’s a humanistic learning exercise as he internalizes concerns that his prayers are said and uttered to an empty void with no one on the other end. Anyone who’s ever prayed can surely relate to that plight.

“Silence” isn’t entertaining in the traditional sense. You may find yourself bored if you aren’t willing to put your beliefs and other beliefs up for scrutiny or if you view religion as an intangible topic. “Silence” is not just an intense examination of religion, but it’s a study of societal ethics and personal morality as it relates to history, culture and your community. It’s not until the end that Sebastia aligns his priorities with what’s best for his. “Silence” may very well be Scorsese’s deeply religious message for those wanting to live life and find peace.

In the summer of 1979 I joined the U.S. Army and took Basic Training at Fort Jackson, South Carolina. I’d like to think we were tough then…running in the Carolina heat – we were the last training cycle to have to run in boots – running the obstacle course and complaining loudly that, when we got the chance to see a movie on post, we got stuck with “Beyond the Poseidon Adventure!” I mention this because, 37 years before I arrived, another young man took Basic at Fort Jackson. His name was Desmond Doss.

We meet young Desmond (Darcy Bryce) and his brother, Hal (Roman Guerriero) as they run through the beautiful countryside of their Virginia home. Like most boys do, they begin to rough-house, which quickly turns to punches. Egged on by their father, the boys begin to throw haymakers. Sensing he’s going to lose, Desmond picks up a brick and lands it against the side of Hal’s head. We have a winner. Of course this does not sit well with his parents, who warn the young boy that he could have easily killed his brother. Religion is important in the Doss household and the commandments are stressed. To break the one that reads, “Thou shall not kill,” according to Desmond’s mother (Rachel Griffiths), is the worse sin of all. Which seems like an easy rule to remember until Pearl Harbor, when the passive Desmond joins the Army. In doing so he learns he’ll have to fight to the bitter end for his beliefs and his life…against his fellow soldiers.

Based on the life of the only Conscientious Objector – these are people that refuse military service on the grounds of personal or religious beliefs – to win the Medal of Honor during WWII, the film relies on strong performances and brilliant storytelling to tell the story without being heavy-handed. Wanting to serve his country, Desmond (Garfield) joins the Army, having been assured that his CO status will not hinder his basic training experience. Sadly, that is not the case. His fellow soldiers, his drill instructor (an amazing Vaughn) and his unit commander are not pleased with his decision. In their eyes, a soldier who won’t pick up a weapon is a coward…someone they certainly can’t count on in battle. As he is given terrible tasks to perform, as well as almost nightly beatings, Doss continues to push on. He scarcely avoids a courts martial and, after much debate, is allowed to travel to Okinawa with his fellow soldiers. It is there that he shows all that will listen what a true hero is.

The cast, led by Garfield, proves to be up to the task of taking the audience into the middle of a war. All of the young men are able to get across the message of helplessness of having to keep your wits about you when everyone else is unable to do so. Garfield does a fine job, as does Ms. Palmer, who plays Desmond’s soon to be wife, Dorothy. But it is Vince Vaughn, as the company NCO in charge that delivers the most powerful performance. Gone is the snarky smart guy, replaced by a character that is perfectly fleshed out. Think of him as a cross between R. Lee Ermey in “Full Metal Jackson” and Tom Sizemore in “Saving Private Ryan.”

Like the latter Spielberg film, the depiction of war is, indeed, hell. Gibson pulls no punches as he moves his camera among the casualties, filling our eyes with missing limbs and our ears with screams. Gibson has always had a great eye behind the camera and this film only adds to that reputation.

“In peacetime, sons bury fathers,” one man notes in the film, noting that “in times of war, fathers bury their sons.” Such is the price of war. I thank God every day that in my six years in the Army I never had to pick up a weapon in anger. I didn’t have to make that choice. Desmond Doss did. And his choices made him a hero.