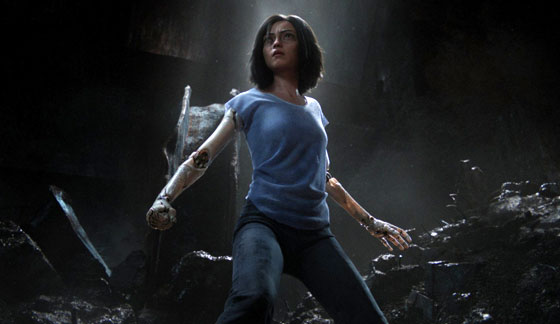 BREAKING NEWS: James Cameron movies are generally more about style over substance. As a screenwriter, his simplistic scripts often play second fiddle to grandiose special effects. A bright, shining example would be 2009’s “Avatar,” which was a fantastic 3D experience that sugar-coated a “Dances with Wolves” meets “Braveheart” storyline. (I can hear someone shouting, “Aren’t you forgetting ‘Titanic?’” Sorry, 14 Oscar nominations but none for screenplay.) Apparently, you can’t teach an old screenwriter any new techniques because Cameron’s latest producer/writing endeavor, “Alita: Battle Angel” is all about shock and awe but lacks a soul.

The story is set in the year 2563 where a dystopian society exists after a mysterious war called “The Fall” has wiped out much of Earth’s population. All we know that is left is a trash heap of a town known as Iron City, which sits directly below Earth’s last floating city – Zalem. Iron City is literally the junk yard for the wealthy Zalem and it is there where mild-mannered Dr. Dyson Ido (Christoph Waltz, “Inglourious Bastards,” “Django Unchained”) finds a disembodied female cyborg with a living brain still intact.

How this cyborg ended up in the trash is a mystery, but nevertheless Dr. Ido rebuilds the cyborg and names her Alita (Rosa Salazar, “Maze Runner”) after his deceased daughter. Alita, a bright-eyed child with no memory of her past, soon befriends Hugo (Keean Johnson, “Nashville”), a teenage street hustler with dreams of getting enough money to buy his way into Zalem. It is through him that Alita is introduced to the violent sport of Motorball, which resembles a souped-up version of 2002’s “Rollerball.”

Thanks to Dr. Ido’s side job as a Hunter-Warrior, which is a fancy title for bounty hunter, Alita becomes exposed to a part of Iron City that leads her on a path to realizing her full potential, which involves a United Republics of Mars berserker battle suit. We are given scant background information about all of this except that there was a whole lot of fighting and some guy named Nova sees all atop his perch in Zalem, which sounds like an over-the-counter sleep medication. Of course, everything leads to a resounding conclusion as the unknown underdog attempts to overcome all odds. How original!

Directed by Robert Rodgriguez (“Sin City,” “Spy Kids”), someone else who is often more about style over substance, “Alita” stylistically is pleasing to watch and there is plenty of action to fill your plate. It doesn’t hurt that the cast contains three Academy Award winners including Waltz, Jennifer Connelly, who plays Dr. Ido’s estranged wife, and Mahershala Ali as Alita’s primary nemesis. They all give a level of gravitas that would have otherwise sunk the film faster than if it was struck by an iceberg in the north Atlantic. While their lines are often unimaginative and cliched, the cast delivers them with such polish that you almost forget how blasé it is.

For pure popcorn flare, “Alita: Battle Angel” does provide some fun for your time at the theater thanks to its talented cast and visual effects. Don’t expect a satisfying climax though as it sets itself up for a sequel, which may not happen if it cannot at least recuperate its massive production costs. Don’t worry though, you will get to see more James Cameron epics as more “Avatars” are set to be released.