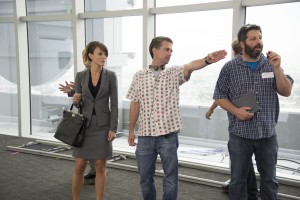 Malek Akkad is the son of Moustapha Akkad, who is know for producing all eight “Halloween” films in the original series up until his death in 2005. Malek took over the reign with the recent reboot of “Halloween” with Rob Zombie and is continuing his father’s legacy. Malek is making his directorial debut with the suspense thriller “Free Fall”, which stars Sarah Butler (“I Spit on Your Grave”) and Malcolm McDowell (“Rob Zombie’s Halloween”). Media Mikes had a chance to chat about the film with him, along with the recently released “Halloween: The Complete Collection” Blu-ray box set and the future of the franchise.

Mike Gencarelli: Tell us about what made you take the jump from producer to director with “Free Fall”?
Malek Akkad: My intended focus when I came out of film school was to do direct. I was doing a lot of music videos, commercials and trying to get up and running in that career. I was a production manager on a couple of shows. My path just took me more on the side of producing and then I started working with my father. In this business, you have to take it where it comes from. So I did spend a few years working in the producing gig, which I do love. My passion is just being in production in general. But I did want to get back into directing, so this was a good opportunity and we had some time between other projects. We came across this script and it felt like it would be a run ride to take.

MG: What made you decide to tackle a suspense thriller instead of horror?
MA: For one thing, I thought the horror genre would be the obvious route to go and I wanted to tackle something that would be outside of the realm that I was comfortable in. Plus I didn’t want to get pigeonholed as “the horror guy”. I found this script and thought the writer was able to really flip the head on a few genre key elements, which I liked. It was also a script that I was able to use some themes that I wanted to address. So it worked on a lot of levels.

MG: You know you seriously just took elevators to a whole new level here, right?
MA: Oh great, awesome! I am great to hear that. Every time I get into an elevator now, I am thinking that karma is going to get me [laughs].

MG: Was it always planned to reunite with “Halloween” star Malcolm McDowell?
MA: He was just perfect for this role. We had worked together twice before and he is just a joy to work with. He also fit the character perfectly actually, so it was an honor that he agreed to do this with me. It is also great to be able to work with actors that you are comfortable with. It was great to work with him once again.

MG: Let’s talks about the “Halloween: The Complete Collection”; how involved were you with this release?
MA: It was a hurdle of getting all the involved parties together. In this franchise, there has been so many different distribution companies and production entities. The first thing to tackle was getting everyone on the same page. Between Shout! Factory and Anchor Bay, they really did a great job in doing that. With the behind-the-scenes material, I think that Shout! Factory really did a great job in putting together a lot of new material. Then we had to go to Miramax and dig up the old elements for “Halloween: The Curse of Michael Myers”. So I definitely had an involvement but most of the credit needs to go to Shout! Factory for putting together a great package that the fans have really been responding to.

MG: Why do you think the idea of Michael Myers is still so effective after all these years?
MA: There are so many answers to that. With horror genre, going back to the great Universal Monsters, is filled with just such hardcore fans. People just love to go in and have that controlled sense of fear. There is enough fear in the world that people can’t control. So if you can spend two hours and you know you are somewhat safe, I think that is something cathartic in that. I think all that feeds into what this franchise has become. Of course, it all goes back to the amazing classic from John Carpenter.

MG: Any progress updates for the next “Halloween” film in the franchise?
MA: Yeah, we are working on one right now. We are due a new draft any day now. We are working really hard to take it to the next level and keep the fans as happy as we can. I think we have a really fun pick and getting everyone involved and on the same page and behind one storyline takes longer than you would think. I think we have finally cracked something that we really liked and we are going to have some announcements very soon!