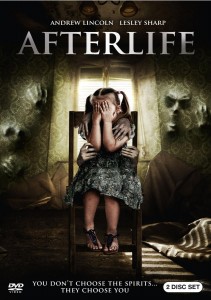 Hold on a sec…did BBC just release a series called “Afterlife” starring “The Walking Dead” star Andrew Lincoln?? Wait a sec, this aired back in 2005? This is honestly, the first time that I am hearing about this series. But BBC Home Entertainment is smart for cashing in on the ridiculous success of “The Walking Dead” and releasing the series 1 and series 2 of this psychological thriller. It also co-stars the brilliant Lesley Sharp (“The Full Monty”). This show didn’t last very long on TV and only aired in the United Kingdom when it did, so this is the first time it is crossing over the pond. If you dig Lincoln, this is a pretty solid show. I really enjoyed it and I wish I would have heard back it sooner. Luckily though, the complete series is available and I recommend it for any “The Walking Dead” fan.

Series 1 Official Premise: A medium who has been able to see spirits since she was a child, Alison appears to be the real deal- unable to avoid the dead who seek her aid, she is driven to resolve relationships torn apart by death. Science-minded Robert finds it hard to change his deeply rooted assumptions that such paranormal activity is impossible. When Alison’s readings provoke an adverse reaction in one of Robert’s own pupils, he begins to observe her with the intention of turning his study into a book. Choosing to believe that Alison is imagining her experiences, Robert finds himself caught up as Alison continuously puts herself at risk in order to comfort both the living and the dead… until she sets her sights on helping Robert come to terms with his son’s tragic death.

Series 2 Official Premise: A chilling psychological drama that enters the world of the dead to answer questions about the living. In the terrifying and emotional climax to the first series, Alison (Lesley Sharp, Scott & Bailey) collapsed and nearly died during a séance in which she was inhabited by the spirit of Robert’s (Andrew Lincoln, The Walking Dead) dead son. Now on the road to recovery, Alison has to accept that the spirits she has seen since she was a child will never leave her. Determined that her life should not be dictated by the dead, she wants to use her gift to help the living. Robert, meanwhile, is in turmoil – once a total skeptic, his beliefs have been shaken by what he witnessed at the séance. He struggles to make sense of his life and turns to Alison for answers… but she is jolted out of her own new-found security by a terrifying presence. For the first time in her life she is being haunted by a spirit from her own past, a ghost she must learn to confront if she is to hold onto her sanity.

The series is only being released on DVD from BBC Home Entertainment. I would have loved to see a Blu-ray release but this show barely looks good on DVD. It is quite grainy throughout. The first series has audio commentary tracks on episodes 1 and 6 with stars Andrew Lincoln and Lesley Sharp, the series creator, Stephen Volk and producer, Murray Ferguson. I like that Lincoln is actually involved here but I am not sure when it was recorded and if it was before his fandom from “The Walking Dead”. The second series only comes with a 45 minutes behind-the-scenes features, which is very thorough and dives into the series’ production.