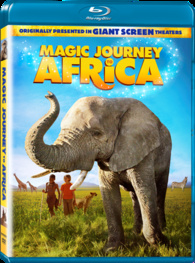 Every year when Earth Day comes around, I always find myself in the mood to watch documentary films like “Magic Journey to Africa”. I never had the privilege of seeing this film in theaters, where it was made for giant-screen format theaters and presented in 3D. Unfortunately, The Blu-ray does not included the 3D transfer of the film. You can tell that this film was shot with that added depth and feels like it is lacking that magic on this Blu-ray release. Nonetheless, it is still fun for the whole family to enjoy, it runs less than an hour so you might want to consider that as well.

Official Premise: A magical and extraordinary world opens before your eyes in this dazzling giant-screen spectacle. On the wings of imagination, an adventure-loving young girl finds herself exploring the mysteries and amazing wildlife of untamed Africa! Spectacular aerial photography captures lions, elephants, giraffes, zebras and a multitude of strange and magnificent animals. The breathtaking landscape pulses with life – the lush rainforests, untouched coastline, ancient red sand dunes and even the culture of a remote native village. A fantastic journey awaits your whole family in a place like no other, a place where dreams and magic come alive.

Image delivered the Blu-ray release in 2D only but it still packs a very sharp 1080p transfer   I sure that this would have looked amazing on the big screen since it was film in that format but still very impressive for a Blu-ray. The audio included is a very nice DTS-HD Master Audio 5.1 surround track.  When it comes to these nature documentaries, the score is always very important to drive the story and it succeeds here.  In terms of special features, there are three  making of documentaries with bonus behind-the-scenes footage and trailers included. It may not be a lot but it is still quite impressive in terms of quality. 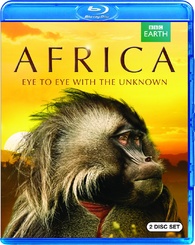 Ever since “Planet Earth”, I have been a nature documentary series junkie.  I can’t help it.  BBC releases some of the highest quality programming and consistently as well.  I love “Life” and “Frozen Planet”.  I can never seem to get enough. “Africa” is yet another breathtaking series that not only educates, it also leaves you stunned. The series is Executive Produced once again by “Mike Gunton” and he should be giving numerous awards for this work on these shows. This 6-part series will really takes you through Africa in a way that no documentary series has every shown you. The cinematography is beyond gorgeous and it is blended well and made entertaining as well with their fantastic stories of survival in place on our planet that has the most diverse animal life anywhere on our planet. Be sure not to miss this series!

Official Synopsis: 553 cameras. 100 days on horseback. 6,526 anti-malarial tablets. Just under 50 tons of kit carried. Executive producer and Primetime Emmy-nominee Michael Gunton and his team of dedicated filmmakers utilized all of this and more to bring you Africa. Four years in the making across 27 countries, Africa is the latest landmark Discovery Channel/BBC co-production to combine groundbreaking technology and dedicated filmmaking to produce a view into this mystifying continent as you’ve never seen it before. Narrated by renowned naturalist Sir David Attenborough, this extraordinary series takes you to epic, never-before-seen locations and captures the incredible new behaviors of the creatures that struggle to survive in a ever-changing continent.

“Africa” is perfectly narrated by the amazing Sir David Attenborough. When this aired on the Discovery Channel they ended up using Forest Whitaker and that is the main reason why I chose not to watch it.  If you are a fan of these series then you should know who Sir David Attenborough is, I wish they kept it the same as the international UK broadcast.  Nonetheless, this Blu-Ray contains the correct narrator like I said and also the original uncut broadcast taking us through Kalahari, Savannah, Congo, Cape, Sahara, and The Future.  Again the Discovery Channel cut out various scenes for commercials, so sad.  When I was a kid, I would have never believe you if you would have told me that I I would enjoy and also learn a lot from a series like this.  But again, they didn’t have amazing product like this when I was a kid.

Let’s get to the high definition 1080p transfer for these episodes. I know I should say more but I really feel that “WOW” really sums it up. Is that enough? Well I can’t say enough great things. The colors are so pristine and the landscapes are perfectly presented and looks crystal clear. Even if you watched this show in HD on the television it is usually only 720p at the most, so this is a real step up and it’s worth the purchase of the Blu-ray alone. BBC Home Entertainment not only delivered perfect video but also perfect audio. This releases comes with a killer DTS-HD Master Audio 5.1 audio track. I know mostly it is used for David Attenborough’s narration, which sounds amazing, but if you really listen you can hear the grass bend and the beautiful songs of the river, deserts and of course the animals. Ace job here!

So you think that the amazing episodes are enough to keep you satisfied with this release? Well that’s great if you are because the rest is all topping then.  There are some really great special features included for this release.  There are over 30 minutes of extra exclusive Interviews with Sir David Attenborough, Executive producer Mike Gunton, series producer James Honeyborne and cameramen Martin Colbeck and Richard Matthews. You want behind-the-scenes featurettes? Good, because there is over an hour included as a bonus feature. Each episode has one and they are a fantastic look into this fantastic production. There are a few additional scenes including exclusive unseen footage from the Harenna Forest in Ethiopia also with commentary by director Matthew Wright and director Nick Easton respectively. Lastly there are about five minutes of Outtakes with the BBC Natural History Unit crew.

“3D Safari: Africa” really takes you deep into the safari and makes you not want to leave. The film is visually amazing and allows us as viewers to experience the beautiful and exotic Africa in 3D. I really enjoyed that the film was hosted by Emmy award winning, Hunter Ellis. I am not sure what it is but I just love watching films about animals and beautiful landscapes. I always find that with these types of adventure documentaries that I always learn something as well. So sit back and get ready to enjoy a very entertaining 90-minute journey.

“3D Safari: Africa” has got it all from hot air balloon rides to a wildebeest stampede to a zebra up again a crocodile to a mother cheetah searching for her lost cub. The film has emotion and is action packed. Who doesn’t love to watch animals up-close-and-personal in 3D, including lions, leopards, hippos, hyenas, zebras, giraffes and many more.

I have seen many 3D Blu-rays. This one looks sharp in 3D but its overall video quality is decent. The audio is enjoyable though boasting a Dolby TrueHD 5.1 track. If you are looking for extras on this disc, you might also be disappointed. There is only one short extra included, a short 3D film called “Living Large: Hippos and Rhinos”. 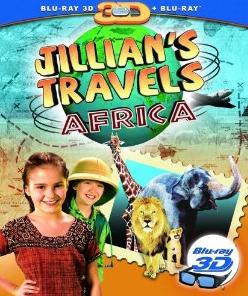 When it comes to education in 3D, I am not going to say no. Africa is a very common subject for this format. Unfortunately, this film would have been a lot more entertaining with the annoying Jillian and her adventures. I know this was aimed at kiddies but I couldn’t even go to that level. The girl was such a snot brat and did not appeal at all. Also the actually safari scenes were ok since she was nowhere to be found besides narrating. If you want to see a cool 3D feature on the Africa check out “3D Safari Africa”.

The film focuses on Jillian Palmer and her brother, Jack as they take a trip with their parents to an African safari. The narrative is told through (annoying) video diaries discussing there journey and trying to educate.   The biggest annual migration of mammals in the world is featured in this which was shot from a hot air balloon while over the Savannah.  Since this is a 3D film, there is focus on cool shots of lions, leopards, hippos, hyenas, zebras, giraffes, wildebeests, vultures, gazelles, flamingos and many more.

Jillian’s Travels: Africa deliver a generally great 3D presentation. It’s video is sharp and looks bright and vibrant. The sound goes well with its Dolby TrueHD 5.1 track, if you can get over Jillian’s annoying voice. The special features are lacking much like the film. There is only one real extra included, which is an short bonus film called “Elephants 3D”. Lastly there is a 3D trailer for “Jillian’s Travels” and More From Level 33 Entertainment.