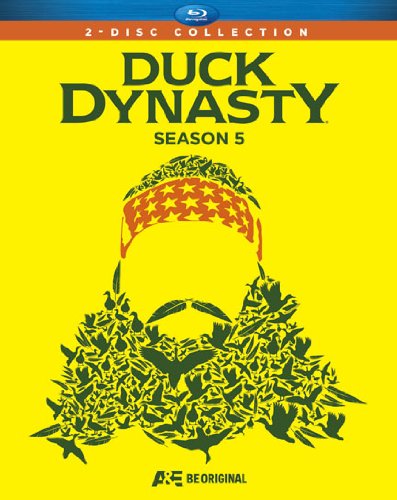 To celebrate the Blu-ray release of season 5 of “Duck Dynasty”, Media Mikes is excited to giveaway one (1) copy of the Blu-ray to our readers. If you would like to enter for your chance to win one of this prize, please leave us a comment below or send us an email with your favorite member of the “Duck Dynasty”. This giveaway will remain open until July 4th at Noon, Eastern Time. This is open to our readers in US and Canada only. One entry per person, per household. All other entries will be considered invalid. Media Mikes will randomly select winners. Winners will be alerted via email.

A new face joins the flock this season, as Willie and Korie’s adopted daughter, Rebecca, comes home to visit after finishing a two-year fashion internship in Los Angeles. Much to Jase’s dismay, Willie shares the joyous news with the family via a group text, Jase’s version of a terrible, technological snowball that you just cannot stop. Si, sick with the flu for the first time in his life, invades Phil and Kay’s house for some much needed rehabilitation, watching his favorite movie series, Air Bud. Willie, worried about Rebecca’s lack of a plan for her future, as well as the pair of skinny jeans she gifted him, are eventually put to rest when Rebecca reveals that she wants to start a business of her own. 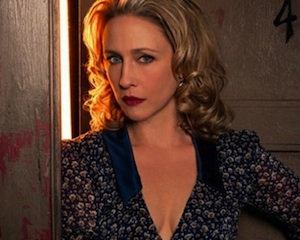 Despite a successful career that had started almost a decade earlier, actress Vera Farmiga didn’t become a household name until her appearance as the psychiatrist caught in the middle in Martin Scorsese’s Oscar winning Best Picture “The Departed.” In 2010 she earned Oscar, BAFTA and Golden Globe Award nominations for her supporting turn opposite George Clooney in “Up in the Air. Since then she has starred in such films as “Source Code” and “The Conjuring.” She is also taking on another iconic role, that of Norma Bates, mother of young Norman, in the A&E series “Bates Motel.” As the second season approaches (it begins on March 3) Farmiga took some time to answer some questions about her preparation for the role, her family’s possible obsession with dark material and the rarity of having a second season while working in episodic television.

Mike Smith: Do you know quite a bit of the story line ahead of time? If so, do you like having that knowledge or would you rather be surprised as you go along?
Vera Farmiga: I’m still figuring what it is that is part of my process. You know, I’ve never had the luxury of a second season. I’ve done three series before and they all never had the opportunity to go beyond 13 episodes in the first season. So I know the first season I did feel a little disabled. Not that I couldn’t act… but I remember (writer) Carlton Cuse asking me “do you want some more clues?” And I wanted to sort of take it an episode at a time and not get ahead of myself. For me it was impossible to dig as deep initially with the root of this new character. I just had to – like it was like I felt like Norman Bates was this like huge voluptuous shrub that I just had to trust in this kind of a shallow root system. And sometimes I felt like I was like showing up to fix his toilet and my toolbox has been like packed by the wife. Do you know what I mean? I just reveled in the opportunity of a second season – television is a much slower process to discovering that background history, the personality, the psychology, the characters and their goals. And there were so many unknowns. And also, the cast is so much closer. There’s an intimacy. There’s a level of like sportsmanship now that we can throw harder jabs at each other. It’s the deeper level of trust that has been – and loved. It’s been established between us and the writers and between the actors. But, yes, for the second season I did ask for more clues. And I wantedto – I wanted to have the trajectory of the second season. I wanted to have more answers at the start, which I was provided with. So I think you’re in for a better second season.

MS: What is it that has been attracting you to more intense and scarier roles – “The Conjuring”…obviously the subject matter in “Bates Motel.” Is it in the blood? You’re sister Taissa is now on “American Horror Story.”
VF: Oh my God, you know, it’s like my own beautiful internal logic about why I choose to participate. Or I think actually the projects choose us. But why like there’s this magnetism oftentimes with dark subject matters is like… I don’t know. And actually to be honest with you, I do – I find dark stories uplifting. I think it’s like during the darkest moments of our lives that we see the light, right. There is a lot of darkness in “Bates Motel,” but again, there’s a lot of joy. I always look at things. And I choose to look at it through the lens of positivity. And I think our story is, yes it’s a story about dysfunction. It’s dark. But it’s a story about commitment and love and family and resilience and loyalty. I look at Taissa in “American Horror Story” and I just think, you know – I’m bias – you know, I’m practically her mother. And she’s just like this bright supernova that shines even brighter in the dark. I don’t know. Maybe it’s because our childhoods were so straight and narrow and full of light and love and goodness. I don’t know. Maybe that’s why we veer toward them more. But the object is to send light into the darkness you know, I mean that’s how I always look at it. So I am attracted to the sordid and the wacky, the unorthodox. But I love infusing it with lightness.

MS: When you first took on the role, were you worried before Seasons 1 how it would work setting it in the modern day? And why is it you think it does work so well?
VF: You know, I think – yes. I’d be lying if I didn’t have some reservation about it when I initially was presented with the offer. I thought there were so many things that can go wrong. And where we are being tethered, you know, we’re borrowing these characterizations or these plots points from like the most successful horror film ever. And that’s why that is a tall order but then it became to me simply a story – at the heart of the story it is this relationship between mother and son. But I didn’t feel any sort of pressure because everything that we knew about Norma Bates was through the fractured psyche of Anthony Perkins’ Norman.

MS: You’ve noted that what the audience “knows” about Norma came through the eyes of Anthony Perkins. Of course, that also means that the audience knows how Norma ends up. I know you are, in parts, trying to be faithful to the original film but, that being said, could you have another potential outcome for her? And if so, does this affect the way the character is written or how you portray her?
VF: The writers have always seen this as a strange love story between this mother and a son. And I don’t mean, you know, incest love. But it’s intense. And it’s…I mean it has to go in a certain direction. The relationship you see in the film, she’s very much portrayed as one type of person. And you don’t ever get to know that in her workings of how it got there, which is really fun in the film. I mean it’s great. And it’s a big surprise when you find out in the film. But here you get the luxury of taking that mess and putting it under a microscope and examining it and wondering how it got there and what the permutations were. And was there anything in at that wasn’t just ugliness because in the film, you know, she’s portrayed as a very abusive, harsh kind of ugly parent and it’s like, okay, well everyone gets mad at their parents sometimes. I mean everyone – every teenager in the world says I hate you. And they don’t hate them. It’s like the parent is such a complex thing to a kid. So it really was just, you know, it’s the love story of those two people and how they get to that place. And what it means and what that looks like. And it’s going to be amazing.