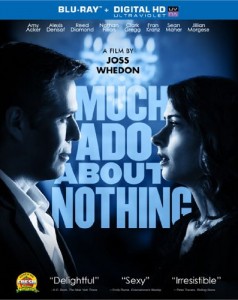 What do you do after breaking box office records and having a film gross over $1.5 billion dollars? Well if you are acclaimed director Joss Whedon, you do retelling of one of Shakespeare’s timeless tales “Much Ado About Nothing” with a contemporary spin…and shoot it in black & white on a no-budget. To be honest, I guess he can do whatever he wants after ruling with “The Avengers”. The film is a charming and entertaining romantic comedy and a must see for any fan of Whedon. I am sure that Shakespeare would be impressed with Whedon’s take on this tale.

Official Premise: The film follows Claudio (Kranz) and Benedick (Denisof ) who have just returned home to Messina after a successful campaign abroad. When earnest Claudio announces his adoration for the lovely Hero (Morgese), daughter of Messina’s governor Leonato (Gregg), the acid-tongued Benedick teases him mercilessly. Benedick’s scorn for love is matched by that of his long-time nemesis and verbal sparring partner Beatrice (Acker), Leonato’s niece. As the lovestruck Claudio and Hero make plans to marry, Benedick and Beatrice resume the “merry war” of insults they have long waged. Yet there are many who believe that for all their antagonism — or even because of it — this pair of incessantly sniping cynics is surely meant to be a couple. As matchmaking schemes are put into play and disguises are donned, loathing and love soon prove to be close cousins.

If you are familiar with Whedon’s work they you will be super excited with this all-star cast from many of Whedon’s cult favorite projects including Amy Acker (“The Cabin in the Woods”, TV’s “Angel”), Alexis Denisof (TV’s “Angel”), Nathan Fillion (TV’s “Castle,” TV’s “Firefly”), Clark Gregg (“The Avengers”) and Fran Kranz (“The Cabin in the Woods”). Also rounding out the cast is one of my favorites Reed Diamond (TV’s “Franklin & Bash”).

Lionsgate delivers the film as a combo pack with a Blu-ray and UltraViolet Digital Copy included. The 1080p transfer is really solid and works very well with the black and white palette. The DTS-HD Master Audio 5.1 track works well with the dialogue and also Whedon’s amazing score. In terms of special features there is some decent content included. There are two featurettes focusing on the production, “Much Ado About Making Nothing” and “Bus Ado About Nothing”. The best part are the two audio commentary tracks included. The first is with screenwriter/director Joss Whedon and the second is with Whedon and the cast. I really enjoyed these. Lastly there is a music video for the song “”Sigh No More” included.