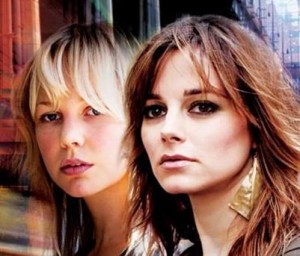 Adelaide Clemens & Bojana Novakovic are co-starring in “Generation Um…” along with Keanu Reeves. You may know Adelaide from the film “Silent Hill: Revelation” and upcoming film “The Great Gatsby”. Bojana Novakovic has been in films like Sam Raimi’s “Drag Me to Hell” and M. Night Shyamalan’s “Devil”. Media Mikes had a chat with these two beautiful Australian actresses about their role in the film and also working with Keanu Reeves.

Click here for our interview with Keanu Reeves and Mark Mann

Mike Gencarelli: Tell us about what drew you each to your roles in “Generation Um…”?
Adelaide Clemens: I think right off the bat for me, it was when I read the script. I thought it was a very dense piece and the characters were really well written. Mia to me was very intriguing. She has this sort of dark past and I liked exploring that.
Bojana Novakovic: I was also drawn by the script. Like Adelaide said, the density of what happens. Also I liked the richness of the characters lives and how much is actually going on without there being plot points. I find that fascinating. I love character pieces. I found it also scary to work on something that was this intimate. It required a lot of authenticity, honesty and commitment…and I really enjoyed that. I think it is an actor’s wet dream actually. Then of course there was the fact that Keanu (Reeves) was attached to the film, which just interested me a little bit [laughs].

MG: I loved the chemistry between the three of you in the film. What did you do to form that bond for this film?
BN: I think that is thanks to the way that Mark (Mann), the director, wanted to work. We just hung out for two weeks, rehearsed and talked about the roles. When Adelaide and I got to meet Keanu, we were both at first a little bit intimidating about meeting a superstar. We tried to play it very cool, but we realized that he was also incredible excited about the film like us. We were able to engage with him on a really intimate, visceral and committed level. So it was really great. The way we worked together was really reflected in the film.
AC: It is interesting how the dynamics between characters came together. I remember during the rehearsals, we were all very passionate about this piece. There were some challenging aspects of the film and we did all the preparation necessary to make sure we weren’t losing our shit when we went on set [laughs].
BN: I think we also surprised ourselves with the terrain we covered ourselves. Like how intimate we were willing to be with each other. I am not just talking about physical, which of course exists in the film but also emotional, honesty and work ethics between the three of us. Actually the four of us, Mark was like a fourth character since he was very present when we were shooting.

MG: When I spoke with Keanu, he told me he has a blast shooting with the camcorder himself. Did you enjoy working with that handheld aspect of the film?
AC: It was very interesting to break down the barrier of the typical shoot. When you are on a film you hear “Action” and you hear “Cut”. It was a new territory there with him since he was always filming. It allowed us to be vulnerable. Then it allowed that vulnerability on the camcorder to transfer to the screen. I thought it was very interesting.
BN: I also felt like the camera exposed us more, like what Adelaide was saying. It was really fun getting to perform to the camera, that way you don’t have to worry about actually performing. You don’t have to about ignoring the camera. So it actually takes the acting out of it. It was awesome.

MG: With Mark Mann writing the script, as well as directing. Do you feel you had much freedom with your characters?
BN: Oh, we had a lot of freedom. I think the whole thing came together with the four of us together in a room and collaborating on these people’s backgrounds. Who they are? Where did they come from? The actual characters formed once we came together. They can’t exist without this story. It was a collaborative process on every level. My decisions were absolutely based on who Adelaide and Keanu were and what they offered to their own characters.
AC: Yeah, we were encouraged by Mark to find our own rhythm and to inject it into these characters, which I think was fantastic. It went against the typical nature since we were able to shape our own characters. Mark also wrote the script in a way that mimics the way that we all speak, which made it even easier.

MG: Adelaide, going from films like “Silent Hill: Revelation” to “The Great Gatsby”, where does this film lie for you in terms of a challenge?
AC: I shot this film long before I shot “Silent Hill”. We did this film two and half years ago. It was an incredible different kind of experience. Like I said we were all very passionate about the material. I had room to work with the script and  of course working with Bojana and Keanu also helped. We all did the work together and really invested in this project. I am very fortunate and happy to see the way that things turned out the way they did.

MG: Being from New York, I know that sometimes the city can have a life of its own. Any cool stories from filming in New York City?
BN: I actually ended up with a bunch of bruises. We don’t know where they came from but they appeared all over my body. I remember I went out doing what I call research one night; Mark told me check out what a party girl would do in New York to get into character. We also did go to a strip club. But one night I was out just observing people and I saw a guy riding a bicycle in a tuxedo. I yelled at him and said “You look fantastic!” Later that night around 2 am, I was waiting for a taxi and wasn’t able to get one. It was that kind of Saturday night in New York. So I started talking with the guy who I yelled to in the tuxedo and he ended up giving me a ride on his bicycle from all the way across town. Then he tried to get my number and I gave him a fake number [laughs]. If he is out there somewhere…maybe I do want you number. I felt bad because he was a cool guy.
AC: I remember we had a crazy thunderstorm one night. The entire sound tent was lifted up and then smashed down. We just had an amazing experience. It was a very intimate crew. I remember one night we needed to get some photos taken and instead of just taking them, Keanu said that there was a photo booth on 2nd and A Street and that we should do there. Mia, Violet and John together are not particularly well behaved together.
BN: [laughs] Yeah, so we were in this booth with Keanu Reeves and we were slamming him against the wall.
AC: Yeah, the public was just around, watching us and seeing it happen. But you know it was New York so no one really cared. But it was really fun.
BN: It was really fun and we had a great time.