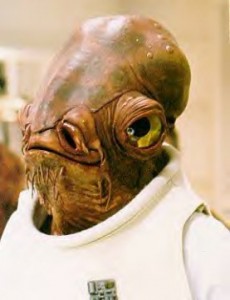 Tim Rose is best known for his his work in “Star Wars: Episode VI – Return of the Jedi” playing Admiral Ackbar, Sy Snootles and Salacious Crumb. Tim has also worked with Jim Henson on projects like “Labyrinth” and “The Dark Crystal”. Media Mikes had a chance to chat with Tim on this film work and reflect on his cult fandom with Admiral Ackbar.

Mike Gencarelli: How can you reflect on the fan base behind your role of Admiral Ackbar?
Tim Rose: When you create one of these characters you have to work 14hr days, sacrifice your home life, and get paid very poorly by you Masters. My reward comes at the Conventions when I get to see just how many people, my silly little playing with dolls has managed to touch and communicate with.

MG: Was the costume easy to work with during shooting “Return of the Jedi”?
TS: Compared to some of the prosthetic characters that can take up to 5 hours to get into, mine was a doddle, just a simple mask to pull over my head. And when my body temperature got to 100f, just as easy to pull back off again.

MG: Why did you end up not voicing the character? TS: When you are inside the character, the recorded sound of your performance is too muffled. Its good enough as a guide track to get the sinq right, but not as final performance. I lived in England and the film was edited at ILM. They never would have paid for me to fly all the way out there for 2 hours work in a dubbing studio.

MG: Do you still get asked to say “It’s a Trap” at conventions?
TS: Only, ALL THE TIME!

MG: Besides your own, who is your favorite “Star Wars” character in the saga?
TS: Pre CGI Yoda of course, I learned everything I know from the master. (Frank Oz)

MG: From “Star Wars” to Jim Henson, can you reflect work on such classic films as “Labyrinth” and “The Dark Crystal”?
TS: “Dark Crystal” had a four year pre-production, that had never happened before or since. Four years of getting paid to play in the worlds best toy shop, creating the dreams of Jim Henson. Because he was a performer himself, he insisted that every thing he made be an instrument that a puppeteer could play. Three quarters of what is made today is a torture chamber that a performer has to endure if they wish to get paid.

MG: How does a puppeteer still stand prevalent in a world of CGI efforts?
TS: Animatronics is much more restricted in what it can visualize than CGI. But it can offer ten times the dramatic interaction on set, the ability to create a magic moment on screen that was never in the original script, and do it all at one quarter the cost of CGI. Producers are slowly beginning to realize this.

MG: What would happen if Admiral Ackbar, Sy Snootles and Salacious Crumb where all in a room together?
TS: The Admiral would be having his afternoon nap. Sy would be looking for the nearest exit to get back to where the action is, and Salacious would be trying to stick rolled up napkins up the sleeping Admirals nose.