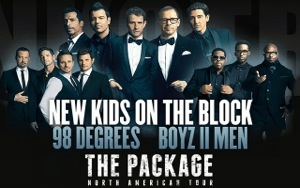 After 25 years of performing together, you would think that the New Kids on the Block might be sick of each other. You’d be wrong. This group looked they were having more fun then a bunch of kids at Walt Disney World, I should know -as I’m there all the time! Donnie Wahlberg, Jordan Knight, Joey McIntyre, Jonathan Knight and Danny Wood were on point last night as they headlined The Package Tour at Amway Center here in Orlando, Florida. They proved that they may be older, but like a fine wine, this group has aged well!

Opening for the New Kids on the Block were Boyz II Men. Nathan Morris, Shawn Stockman and Wanya Morris showed the crowd that this is what they had been missing all these years. Their set was just about 30 minutes and it proved to be lots of fun and full of nostalgia. They sang their hits “On Bended Knee,” “I’ll Make Love to You,” “Motownphilly,” “It’s So Hard to Say Goodbye to Yesterday” and “Water Runs Dry.” The Boyz proved that they still got it. Their energy was through the roof and they all looked and sounded great too.

Following Boyz II Men, was the ballad loving 98 Degrees. Proving that time has been good to the whole group, the guys of 98 Degrees showed off their vocals and their muscles, as they performed in wife beater tank tops for most of their set. They’ve traded in the mushroom haircuts and the baseball caps for sleeker hair and vests and suspenders. As was agreed upon by the women in the crowd around me, Jeff looked as though he had stepped out of the pages of a Fireman’s Calendar donning suspenders and tight shirt displaying his biceps. Getting back to the music, 98 Degrees put on a good show. Their energy was not as high as Boyz II Men and their choreography seemed to need a little bit of an update. They sang their hits, “Invisible Man,” “The Hardest Thing,” “I Do (Cherish You),” “”Give Me Just One Night (Una Noche),” and “Because of You.” 98 Degrees also showcased a new song off of their latest album, “2.0,” called “Microphone,” which was enjoyable. Nick Lachey, Drew Lachey, Justin Jeffre and Jeff Timmons showed that they can still perform their hits well and that they just may have some heat left in them.

We were informed at the beginning of the New Kids’ set that we would be in for a 2 hour set and that we should kick back, relax and party like there’s no tomorrow. Laser lights beamed brightly as the group came on stage and promptly started in with one of their singles, “We Own the Night” off their newest album, “10.” From that song on, it was a set filled with fun choreography, wardrobe changes, fog, pyrotechnics, a rotating and rising stage, and five very good looking, happy guys who were loving the crowd and having a ball performing.

The New Kids performed a variety of songs from their past hits such as “You Got It (The Right Stuff),” “I’ll Be Loving You Forever,” and “Step By Step.” In what proved to be an incredible medley, the group performed “Didn’t I (Blow Your Mind),” “If You Go Away” and the highlight of the medley featured Joey performing “Please Don’t Go Girl.” He may not be hitting the high high notes as he used to, but Joey McIntyre proved he is a force to be reckoned with as he clearly knocked this song out of the park!

The set that the New Kids performed included some tributes to other performers as Jordan sang Prince’s “Kiss,” Joey sang a cover of George Michael’s “Faith” and Donnie sang Nelly’s “Hot in Herre” into which the group then sang their own hit “Dirty Dancing.” Other hits included in their set were “Click, Click, Click” “Single” and “Remix.” And a real treat for those of us on the floor and even in the surrounding 100 section, was when the New Kids performed “Tonight,” they walked through the crowded swarms of screaming women and hugged and sang to all of us. It was truly an amazing feat, as their fans proved to be very much in love with every single one of these guys and really didn’t want to let them get back to the stage!

Jordan proved he can still hit the high notes, Danny showed off his break dancing skills, Donnie proved to be the group’s leader and emcee as he conducted the crowd, Joey has some new dance moves and an amazing set of pipes, and finally Jonathan proved to be an incredible performer that those of us who have been lifelong fans, knew he always was. All in all, The New Kids on the Block put on an amazing show. Their final two songs left the crowd wanting more as they paired with Boyz II Men to sing their hit , “Motownphilly,” and then finished the show out with an incredible, confetti-filled, “Hangin’ Tough.” If you are a fan of any or all of these bands, get yourself to an arena near you when the Package comes to your town, it’s the one gift you’ll want to open again and again!