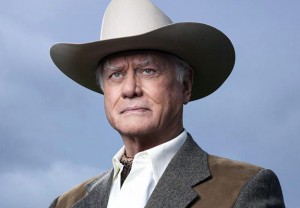 Larry Hagman, who will forever be remember for his portrayal of one of television’s best loved (and hated) characters, died earlier today (November 23) after a bout with throat cancer. He was 81.
Born in Fort Worth, Texas, Hagman’s parents were Benjamin Hagman, a local district attorney, and his wife Mary (nee Martin). The two had met in high school and Benjamin convinced Martin’s parents to allow them to marry when she was seventeen. His parents divorced when Hagman was five and he and his mother moved to California, where they stayed with his grandmother. It was while in California that Mary was signed to a contract with Paramount. In later years she would become a star on Broadway, originating lead roles in musicals like “The Sound of Music” and “South Pacific.”
Hagman attended several schools as a young man, including the Black-Foxe Military Institute. While his mother went off to New York he remained with his grandmother until her passing, then was sent to boarding school. It was at these schools that he developed a liking for drama classes. He graduated from high school in 1949 and, on the advice of his mother, decided to give acting a try professionally.
While attending Bard College he took some time off to appear in a New York City production of “The Taming of the Shrew,” then spent the summer traveling the country in a variety of musical road shows. In 1951 he joined his mother in the London production of “South Pacific,” remaining with the show for over a year. In late 1952 he was drafted by the United States Air Force and spent four years in London entertaining troops stationed there. After his discharge he returned to New York City where he appeared in several plays, both on and off-Broadway, and the occasional television program. In 1961 he joined the cast of daytime soap opera “The Edge of Night,” playing Ed Gibson for two years. He made his film debut in 1964 in the comedy “Ensign Pulver” and later appeared opposite Henry Fonda in “Fail Safe” that same year.
In 1965 he was cast as Captain Anthony Nelson in the hit television series “I Dream of Jeannie.” The show featured Hagman as the “master” of Jeannie, a beautiful blonde he discovers when he finds an old bottle on the beach. The two eventually married and the show ran until 1970. For years after the show was canceled Hagman refused to associate with anything connected to it, refusing to appear in the two subsequent made for television movies. Although Eden did make an appearance on “Dallas” it wasn’t until 1999 that he agreed to appear with Eden and fellow co-star Bill Daily for a reunion on “The Donny and Marie Show.”
In 1977 Hagman was cast as J.R. Ewing in the nighttime soap opera “Dallas.” As the oldest son of Jock Ewing, J.R. was the bad guy you loved to hate. His scheming and conniving ways came to a head at the end of the second season when J.R. was shot. That summer the phrase “Who Shot J.R.?” became a business in itself, with T-shirts and bumper stickers popping up all over America. That summer also saw Hagman asking for a large raise. The story I was told goes like this:
The producers called Hagman’s agent and asked him and Hagman to come to their office on Monday morning. When they arrive they are taken to a screening room where they are shown the last scenes of the last episode. They see a body being put into an ambulance and the ambulance speeding away. Suddenly another vehicle hits the ambulance, which bursts into flames. The screen goes black and the words SIX MONTHS LATER flash across it. Fade in on a face heavily bandaged. Off screen a voice says, “Because of the extensive plastic surgery we had to do you may not look the same Mr. Ewing.” The bandages are removed and there in the hospital bed is Robert Culp.
A deal was finally made and on November 21, 1980 (ironically 32 years ago this week) the world discovered who had shot J.R. The show ran until 1991, earning Hagman multiple Emmy and Golden Globe nominations as Best Dramatic Actor. In 1995 Hagman underwent a liver transplant. He had acquired a drinking problem as far back as high school and was reported to drink up to four bottles of champagne a day on the set of “Dallas.” He also quit smoking that year, becoming a spokesman for the American Cancer Society in later years.
After “Dallas” he continued to work, appearing in such films as “Nixon” and “Primary Colors” as well as recurring roles in such television shows as “Orleans” and “Nip/Tuck.” In the summer of 2011 Hagman made two major announcements about his life and his career: “As J.R. I could get away with anything — bribery, blackmail and adultery. But I got caught by cancer. I do want everyone to know that it is a very common and treatable form of cancer. I will be receiving treatment while working on the new Dallas series. I could not think of a better place to be than working on a show I love, with people I love.” He revealed to the world that he had stage one throat cancer while also announcing his return to the role he loved in the updated version of “Dallas.” The show debuted earlier this year to great success, brought about, no doubt, by the presence of the irascible Larry Hagman. A true television legend who will be sorely missed
Read Complete Article
Filed Under: TV Headlines Tagged With: 81, dies, hagman, larry, legend, television, ...
Page 1 of 1