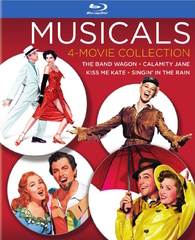 There is something about old time musicals. 1952 and 1953 were big years for musicals. This latest 4-Movie Collection includes “Calamity Jane” (1953) / “The Band Wagon” (1953) / “Kiss Me Kate” (1953) / “Singin’ in the Rain” (1952). Other than “Singin’ in the Rain”, the rest of these three films are making their Blu-ray debut in this collection. Personally, the real draw here is the fact that “Kiss Me Kate” is being released in 3D. That’s right, 3D as the film was original made to be seen. Along with these movies, this also includes collectible art cards. If you love musicals, this a must own.

“The Band Wagon” Official Premise: Tony Hunter, a fading film star decides to return to his former glory, the Broadway stage. His playwright-songwriter friends hook him up with Broadway’s hottest director, Jeffrey Cordova, who proves that the “new” theater traditions can be an awkward fit with the old.

“Calamity Jane” Official Premise: When she isn’t tearing up the town, Jane spends her time cussing out Wild Bill Hickok. The plot gets under way when Jane promises the citizens of Deadwood that she can persuade classy Chicago stage star Adelaide Adams to perform at the local opry house. Through a case of mistaken identity, Jane brings Adelaide’s maid Katie back to town. Katie proves to be a success all the same, and out of gratitude promises to make a lady out of Jane, who is sweet on handsome Lt. Gilmartin.

“Kiss Me Kate” Official Premise: At his New York apartment, actor Fred Graham and composer Cole Porter discuss plans to recruit Fred’s ex-wife, actress Lili Vanessi, to star in their new show, Kiss Me Kate , a musical version of William Shakespeare’s “The Taming of the Shrew.” Lili arrives, and after singing the love duet with Fred, agrees to consider taking the role of Katherine. They are interrupted by the arrival of flashy dancer Lois Lane, who has used her wiles on Fred to secure the role of Bianca. Jealous words fly between the two women, and Lili prepares to leave, after informing Fred that she is going to be married soon.

“Singin’ in the Rain” Official Premise: Silent movies are giving way to talking pictures – and a hoofer-turned-matinee idol (Gene Kelly) is caught in that bumpy transition, as are his buddy (Donald O’Connor), prospective ladylove (Debbie Reynolds) and shrewish costar (Jean Hagen). Rediscover the musical masterwork, “Singin’ In The Rain”, with a downpour of celebratory special features that salute not just this all-time favorite but also the musical legacy of its producer, songwriter Arthur Freed.

The 1080p transfer for look great for each of the films. I really enjoyed the 3D transfer for “Kiss Me Kate”. This is cool to see since it has never before seen in this format since its theatrical release. So this is real treat. “The Band Wagon”, “Kiss Me Kate 3D” and “Singin’ in the Rain” have equal DTS-HD Master Audio 5.1 tracks. They are all equally impressive. The music really works well and sounds very impressive. “Calamity Jane” only carries a DTS-HD Master Audio Mono track. It is still solid but lacks the pop of its fellow films.