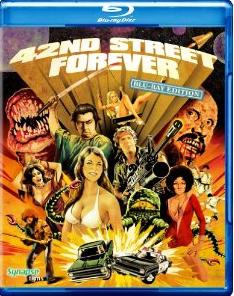 I just love the Blu-ray format. The “42nd Street Forever” series has been released before but over various different volumes on DVD. So what is “42nd Street Forever”? Well if you are a fan of grindhouse and exploitation films, then it is your new favorite Blu-ray! This is a best of collection that includes an amazing collection of vintage theatrical trailers. It combines the first two volumes of the series and even adds in with some all-new selections.

No matter what you are looking for sex, violence or monsters, this includes all that and a whole lot more. Being a born New Yorker, I remember walking the streets of the city and being intrigued with the infamous 42nd Street many years ago. Though, I wasn’t around from the late-’50s through the 1970s but thanks to Synapse Films we are able to experience a little piece through these trailers. What is even cooler about this release is that there is over three and a half hours of trailers from all over the world. So sit down get, get your popcorn and get ready to get your blown away with the charm of 42nd street.

Just to give you an idea of some of the trailers included are: The Flesh And Blood Show, The .44 Specialist, Ginger, The Grim Reaper, The Guy From Harlem, Hard Candy, Helga, Hells Angels On Wheels, Honky, I, A Woman, I Disremember Mama/Blood Spattered Bride, Invitation To Ruin, The Italian Stallion, Maid In Sweden, Mark Of The Witch, Ms. 45, Panorama Blue, The Pink Angels, The Pom Pom Girls, The Raiders Of Atlantis, Savage!, Savage Sisters, Secret Africa, Shocking Asia, Shogun Assassin, Spy In Your Eye, Street Girls, Sugar Hill, Super Fuzz, Supermanchu, Taboos Of The World, The Tale Of The Dean’s Wife, The Teacher, They Call Her One Eye, They Came From Beyond Space, The 3 Dimensions Of Greta, The Undertaker Ana His Pals, Welcome Home, Brother Charles, Werewolves On Wheels, When Women Had Tails, Wicked Wicked and Many More!

This release looks absolutely stunning in its remastered 1080p high definition transfer. Of course, some of the trailers are not the best quality but that is just expected especially with exploitation films. Just be warned, keep the kiddies (and maybe even wife’s) away because this is not afraid to offend you at all. If all that isn’t enough, there is also I hope that Synapse will release the future volumes on Blu-ray as well or at least continue to release the films from these trailers on Blu-ray. Keep it up Synapse you guys have never disappointed yet.