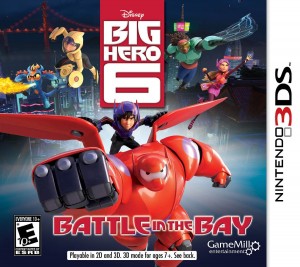 Right from the start, “Big Hero 6: Battle in the Bay” was off to a bad start. I thought there was something wrong with my 3DS and it turned out the game isn’t presented with 3D effects. I mean come on, there are indie games that are coming out in 3D and a big game like “Big Hero 6” is not. Very disappointing. The game difficulty is extremely easy. The bad guys are no challenge at all, in fact I beat the first boss while checking my email on my phone. You play as each of the five main characters mixed up throughout the game’s 20 levels, which will take the average gamer about an hour or two to beat. The other main issue is that Baymax, who is the best character in the movie is merely background noise. Big miss here for sure.

Official Premise: Following on the heels of their super hero debut, the Big Hero 6 team has targeted a dangerous gangster named Yama and his legion of out of control fighting robots! Take control of the stars of the film in this action packed combat platformer! Send robot’s flying across the screen as Hiro with his electro-mag gauntlets! Zoom through levels at top speed as Go ! Slice and dice as Wasabi with his plasma blades! Smash and burn as Fred in his Kaiju monster super suit!

“Big Hero 6: Battle in the Bay” features no spoken dialogue or cut scenes at all along with bland and repetitive sound design. One thing this game does have though to add slightly more game play instead of jump flying through each level is that there is some in-game collectibles. You can collect various hidden items in each level including a cat, a plus symbol consisting of five cubes and the word HERO spelled out. Finding these items will provide health upgrades as well as trophies, art work and more. Unless you are completely obsessed with “Big Hero 6” and need to have everything from the movie, this is a definite pass. 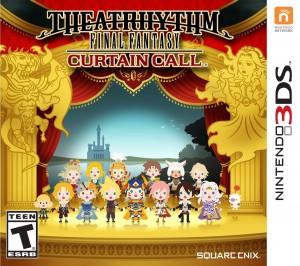 If you consider yourself a “Final Fantasy”, then you should be very familiar with the music from the franchise. “Theatrhythm: Final Fantasy – Curtain Call” is the sequel to the Theatrythm: Final Fantasy” released in 2012. This game builds a lot from the first game. There are new gameplay modes, over 200 songs and 60 playable characters. If you are unfamiliar with the game, it is a tap along rhythm with stylized characters battles and quests. This game is a vast improvement over the first game and is jam-packed with so much content for all “Final Fantasy” fans.

If you enjoy “Final Fantasy” included here are songs and characters from many new releases including “Lightning Returns: Final Fantasy XIII” and “Final Fantasy XIV: A Realm Reborn” and classic fan favorites such as “Final Fantasy Tactics and “Final Fantasy VII: Advent Children”. Ever since I played “Final Fantasy” on the original Nintendo NES, I knew that I was in love with this music. Over the years, that love has only grown. Personally, I was growing old with the rhythm tapping games, but this really revamped my interest as this blends the aspects of an RPG so well, making this a blast to play.

The all-new modes include a Versus Mode, where you can go head-to-head along with Quest Mode, where players customize a party of their favorite characters to take across fields and into dungeons for music-based battles against series bosses and Classic Battle Mode from the first game. You can also unlock “Final Fantasy: Gather Rhythmia” to uncover new characters, songs, and collectible cards, which can be used in the all new Collecta Crystarium to power up your characters’ stats.

Thanks to Square Enix for sending us this game since it is was a real blast to check out. I have a feeling that I will be enjoying this game for months to come. The 3D aspect for me was always turned on since it brought a lot of the game itself and made the look great. The only issue I had was the lack of support to us left handed people since it definitely would come much easier to all right handed players. I would like to see where they can take this franchise yet since hopefully this is only the beginning for them. 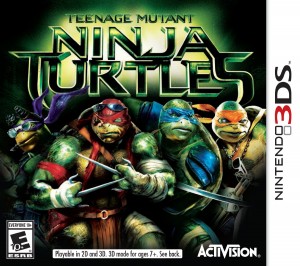 I have been a Turtle fan for 30 years now. I have grow up with them and now my daughter is growing up with them. “Teenage Mutant Ninja Turtles” is third Activision game for the franchise and is a tie-in based around the new 2014 reboot, which is dominating theaters. The first game was based on the new Nick 2012 cartoon, it was not terrible but not amazing either. The second was called “Out of the Shadows”, which is a little better but this is easily the best of the bunch. Understand that it is still a movie tie-in game on a handheld device, but it is still fun to play and has good reply value.

Official Premise: They were born in shadow. They live in shadow. And they fight in shadow. New York City’s crime rates are still on the rise and the city’s civilians are trembling in fear! Baxter is formulating an evil plan and this time he has both mutants and robots at his disposal. Join the local brethren of vigilantes who need to rally together to put a stop to this evil once and for all! It’s team TMNT, Splinter and April O’Neil in the fight against the worst evil to face the beloved NYC in this adrenaline-pumping story!

Before we get into the game, let’s get this out of the way that these turtles DO NOT JUMP! This is a quite a bummer, especially if you grew up like myself playing the arcade game. The game still had a lot going for it though don’t worry. You are able to play as all four turtles, switching as you please throughout each level. Each character has their own special abilities and contribution to the gameplay. For example, Donatello has a longer reach for wide attacks and Michelangelo is very fast.

A reason why I really enjoyed did was that doesn’t the character’s abilities you are also able to earn XP and level up each of your characters skills, weapons etc. The 3D on the game is actually a must as well. I played without it, I honestly didn’t enough it as much. If you are looking for more after this, don’t worry Turtle fans because Nickelodeon is hooking us with “Teenage Mutant Ninja Turtles: Danger of the OOZE” coming right around the corner on Nov 11, 2014. So more is just around the corner. 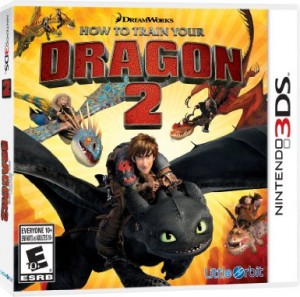 How you think of the successful film and TV series “How to Train Your Dragon”, you can’t really go wrong. The first film is amazing, the second is even better and the TV series is a great companion.  Unlike all those, “How to Train Your Dragon 2: The Video Game” on Nintendo 3DS is quite underwhelming. In the game you basically choose a dragon and it’s rider from the series, then you fly around Berk racing other dragons, exploring for coins and playing mini-games. After the first hour, it gets quite repetitive. I would recommend sticking to the films and TV series and skip this game.

Official Premise: Take to the skies and return to the epic Viking Isle of Berk Five years later Dragon Racing has become the hot new sport for the Vikings. Hiccup Astrid Snoutlout Tuffnut & Ruffnut and their dragons are competing in fierce flying tournaments to determine the ultimate Dragon Rider. Soar through clouds and discover unmapped territories. Discover a secret ice cavern that is home a mysterious Dragon Rider and find yourself in an epic battle to protect their peaceful homeland.

I know I really should be shocked about this game, since usually all video game adaption of films never pan out. This was made on a tight budget and probably was just an updated version of the last “How to Train Your Dragon” handheld console game. The control are very weak when it comes to flying, which takes forever to figure out and master, but by the time that happens, I was just left wanting to turn this game off and play anything else. If you are a die-hard fan of this series, you could give the WiiU or XBOX 360 version a try…just don’t expect nothing spectacular their either.