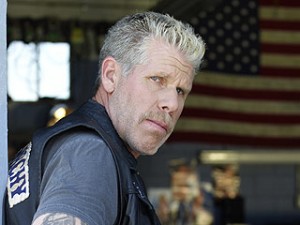 Ron Perlman is known for his many unique roles like Hellboy or Vincent in “Beauty and the Beast”. He also plays bad-ass biker, Clay Morrow, in “Sons of Anarchy”, which just started it’s fifth season on FX. Ron tackles a completely different role in the new comedy “3,2,1…Frankie Goes Boom”.  He is playing the role of the transsexual ex-con, Phyllis. This film is a absolute riot and Perlman really steals the show. Media Mikes had the honor to chat with Ron about this new role, his recently “reset” character on “Sons of Anarchy” and his continuously growing resume working with  Guillermo del Toro.

Mike Gencarelli: What drew you to the role of Phyllis, the transsexual ex-con in “3,2,1…Frankie Goes Boom”?
Ron Perlman: It was not a childhood aspiration let me tell you [laughs]. However life its strange way of taking twists and turns that you never see coming. It turns out that Charlie Hunnam, my co-star on “Sons of Anarchy”, was going to to this film as his summer school pet-project. I get a call from him that the filmmaker would consider reading this script and play the role of Jack (this ended up being played by Chris Noth). I started reading it and I got to page 2 or 3 and I just said “Holy shit, this is really funny and I need to be in this movie. I started reading Jack’s part and I really loved Jack…but then I got to Phyllis. I get this mental image

of Jax Teller from “SOA” coming in and seeing Clay Morrow in a house dress, red nail polish, lipstick and being asked to kiss his hand. I said “Well, if that doesn’t get these fuckers nothing will” [laughs]. The more I read of Phyllis, the most I realized that this will be a really fun character to explore and unlike anything I have ever done before. I really admired the comedy in the writing. I called up and told them what I wanted to do and they said “It just so happens that you are the only person with the balls enough to ask to play Phyllis and by default you got the part”.

MG: Where did you get inspiration for the character?
RP: There was really no real inspiration from her that came from my life personally. Everything I used as a jumping off point as with what Jordon (Roberts) wrote. I just love the notion that Phyllis starts off as Phil, a guy who is an outlaw and is this computer hacker. He has this amazing ability to rip off Bank of America for $2 million bucks and that is how he ends up being Bruce’s (Chris O’Dowd) cellmate. He always had this notion of being a woman born in a man’s body and feels compelled to fix that. I said to myself “Jesus, if I can’t figure some interesting idiosyncrasies for the planning of this guy, then I should really turn in my Screen Actor’s Guild card.” [laughs]

MG: How was it going from working with Charlie Hunnam on “Sons of Anarchy” to this film?
RP: Some of the scenes that could have been very uncomfortable, and if fact where very uncomfortable, it helps that I had a bro on the set. I could say “Dude, it behooves us both to never get into the press as to how the filming of this actually looked and smelled like”. That fact that it was my bro that I was doing this with really helped a lot.

MG: Do you find that comedy comes natural for you?
Comedy was what started me off as an actor. I did some stand-up when I was really young, growing up in New York. Then I joined a troupe with a group of friends doing sketch comedy. So that was my first love. Hollywood does afford me to do a lot of comedy. So in order to find these opportunities, I have to go underground and find projects like “Frankie Goes Boom”. But when I am able to do it, it is a real pleasure.

MG: After five seasons, do you feel that that Clay Morrow has changed within your portrayal?
RP: In the first four years, he has this station in life and this stability and marriage with Gemme (played by Katey Sagal). Now in season five he has lost everything. He is on a reset now. No one knows where he ends up at the end of season five, including yours truly. But he is definitely on a journey where the sand is shifting under his feet and he is re-adapting himself. What an amazing opportunity that is

for me as an actor. You sign on to do a TV show, the conditions of which are highly well articulated and then all of the sudden five seasons in you are almost playing a new character. It is the same character but under completely new circumstances. Yeah, it is awesome and you don’t get to do that often on television. We all feel very blessed that this show is such an un-obvious exercise in storytelling. It sets a completely unpredictable set of circumstances and also while continuing to be very dynamic and violital. It is flood with very explosive violence and it is like a bad car accident…you can’t take your eyes off it.

MG: Are you and Charlie planning to work together on every project, after this you have “Pacific Rim” coming out?
RP: Yeah, for life man. This is it. Charlie Hunnam and I. We are the new Laurel and Hardy or Martin and Lewis or Abbott and Costello or probably Charlie McCarthy and Edgar Bergen. But I am not sure which one is the dummy.

MG: How was it working with Guillermo del Toro yet again on this film?
RP: Oh my God, this is number five for me and GDT! We felt like family members from the very first project, “Cronos” and on. We became really good friends. So to get to go through life together celebrating this friendship and doing it in such a way that we add-in these wonderful creative opportunities into the mix is great. I am watching him evolve as a filmmaker and he is watching me grow old as an actor. We are getting to do it in each other’s presence. That is in a category that I can only label as “Undescribable”. There are no words to describe how phenomenal that reality is. Now that we hit the number five [laughs], it is pretty clear to me that it is not a fluke. It is probably something we will continue to do until one of us drops, and I got a really good feeling I am going first.

MG: You’ve been successful in both film and television, do you have a preference?
RP: I really love working for the camera. I really love working on interesting material. I would have to say the opportunity I have on this particular television show is probably 500 percent better than any other television exercise that one could hope to be on. There are some really great TV shows out there now like “Newsroom”, “Breaking Bad” and “Boardwalk Empire”. There is a lot of great stuff now being done on television. But for the most part those are the exceptions to the rule. And I am on one of the most exciting shows to be a part of. It is almost like doing a movie since it is such a charged and intelligent setting. So yeah, I don’t have a preference as long as it answers to those edicts. 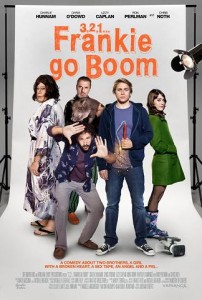 “3,2,1…Frankie Go Boom” is one of the most zany, over-the-top, dysfunctional comedies of the year. It includes also one of the most unique and fantastic collection of actors. Charlie Hunnam and Ron Perlman, who have co-starred in “Sons of Anarchy” and Guillermo del Toro’s upcoming “Pacific Rim”, get a chance to team up again on this project. I have a feeling they should just together on every project. They are simple hysterical together. Lizzy Caplan is fantastic and perfectly neurotic. Also playing her father is Chris Noth, who really delivers a riot of a role and changes the way I will look at a treadmill again.

Now back to Ron Perlman because he deserves his own paragraph. He doesn’t show up till about 57 minutes in but easily makes the whole film. He has been known for his roles like Vincent in “Beauty and the Beast”, the devil child Hellboy and most recently Clay Morrow in “Sons of Anarchy”. Now in “3,2,1…Frankie Go Boom”, he is able to add the role of Phyllis, the transsexual ex-criminal. When he comes on the screen you can’t help but say to yourself…”Wow, only Ron Perlman can pull this off”. The man nails the role and steals the show.

Now let’s get to what this film is actually about. When Frank Bartlett (Hunnam) comes home to support his brothers, Frank (O’Dowd), release from rehab, who has tourterd him all his life. When Frank meets Lassie (Caplan) and finds out that his brother secretly shot sex tape of them and uploaded to the internet, they need to find a way to get it down. To make it worse they find out that Lassie is the daughter of a washed-up unstable movie star, Jack (Noth). They turn to Phyllis, the transsexual ex-criminal (Perlman), in order to take the video down before it goes viral. Let’s just say that nothing goes right.

Overall great casting and smart script lead up to this fun little film. If you are looking for a new definition to dysfunctional family, then be sure to check out “3,2,1…Frankie Go Boom”. Be sure to stay until the screen goes black for more Perlman/Noth! Totally worth it!