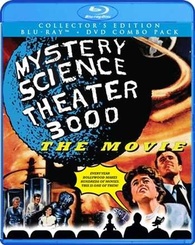 I have been a way of Mystery Science Theater 3000 or MST3K (to hardcore fans) since it first started airing on TV. I have always admired classic 50/60’s cheesy sci-fi/horror films growing up and this was a great way to enjoy it on a new level through humor. MST3K was produced and set between seasons 6 and 7 of the show and felt like a regular episode of the show yet quite epic at the same time. Trace Beaulieu (Crow T. Robot), Kevin Murphy (Tom Servo) and Michael J. Nelson are just a riot together. If you are a fan of this type of humor also check out Michael J. Nelson and Kevin Murphy’s latest collaboration, RiffTrax, which are downloadable audio commentaries for many many great (I mean horrible films). “This Island Earth” is such a fun film, bad, but still fun. The jokes are never better and still funny after all these years. I highly recommended release for all fans of MST3K!

Official Premise: After six seasons of sublime, nerdy fun on television, the cult comedy series Mystery Science Theater 3000 took to the big screen in 1996 for its deliriously funny takedown of the 1955 alien invasion epic This Island Earth. Evil scientist Dr. Clayton Forrester explains the premise at the start: in his quest for world domination, he devises a scheme to subject the human race to the worst movies ever made. He tests his plan on Mike Nelson, the sole human aboard an Earth-orbiting space station known as the Satellite of Love. But our hero and his two robot sidekicks turn a lemon into a much funnier lemon by showering This Island Earth with wisecracks, ridicule and general silliness. The human race may never be rid of cheesy movies, but when the critics are this nutty, who cares?

Shout! Factory released this Collector’s Edition as a Blu-ray + DVD combo pack. I have to admit, I was actually rather impressed with the 1080p transfer. We have all see MST3K and we know that the films that they critique are not the highest quality of cinema. They are usually old 50/60’s public domain films but they did a good job of cleaning this up for its high-def debut. The DTS-HD Master Audio track also works well with the film’s very fast and snappy jokes.

What I am most excited about is the fact that there are some decent special features included for this release. There is “The Making of Mystery Science Theater 3000 The Movie”, which gives a lot of great insight about the MST3K crew and the production. There are deleted scenes including the removed sequences from the riffed motion picture and the alternate ending. So this is a must for all fans! “Mystery Science Theater 3000 The Movie: The Motion Picture Odyssey” includes new interviews with cast and crew and never-before-seen behind the scenes footage. This is again a must for any fan. “This Island Earth: 2 1/2 Years In the Making” shows how much preparation it was to put this today. Lastly there is the original trailer included.