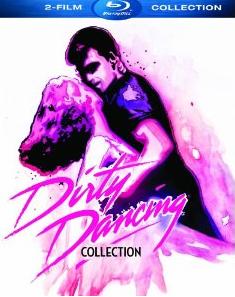 After the 2007 Blu-ray release of “Dirty Dancing” and its terrible transfer, I was hoping this one was going to be a great improvement.  I won’t say I had the time of my life reviewing these…but it was better than carrying a watermelon.  Overall, it is much better and, if you consider this is a bonus, it also comes with the sequel, “Dirty Dancing: Havana Nights”, which is available for the first time ever on Blu-ray. With two films, a whole mess of special features and a ridiculous low price of $14.99, this is a no-brainer if you don’t already own the film on Blu-ray.

The Blu-ray presentation on both films looks good in 1080p high-def transfer and both with widescreen 1.78:1 aspect ratio.  The audio on both films are also very impressive boasting a sharp 7.1 DTS-HD Master Audio.  While it is not the best 7.1 track ever, I am impressed that Lionsgate hooked these films up. “Dirty Dancing” also packs an alternate audio track, Dolby Digital EX 5.1.

The special feature for “Dirty Dancing” are fantastic, though nothing new for this 25th anniversary release. There are two audio commentary tracks from writer Eleanor Bergstein which dates back to the original DVD and the second commentary track from the Ultimate Edition DVD release with Choreographer Kenny Ortega, Assistant Choreographer Miranda Garrison, Cinematographer Jeff Jur, Costume Designer Hilary Rosenfeld, and Production Designer David Chapman.  Both are decent but kind of dated.  There is a text-based copy of the entire “Dirty Dancing” script from writer Eleanor Bergstein.  There is an interview with Miranda Garrison, who played Vivian Pressman and served as assistant choreographer for the film. “Dirty Dancing: Live in Concert” is fun feature just to watch fro the 80’s fashion.

There a bunch of featurettes including on this release including “Kellerman’s: Reliving the Locations of the Film” features crew revisiting shooting locations.  “The Dirty Dancing Phenomenon” takes an inside look with interviews through the success of the film.  “The Rhythm of the Dancing” features Swayze discusses the music in the film. “Dancing to the Music” focuses on the film’s music and dancing. Lastly, there is also a vintage featurette to show take you back to when “Dirty Dancing” was in theaters.

“In Memoriam” looks at the cast that has since passed including Jerry Orbach, Jack Weston, Emile Ardolino, Max Cantor, and Patrick Swayze.  The late Patrick Swayze discusses the impact the film had on his life in “Dirty Dancing with Patrick Swayze”.   There are some retro interviews with Jennifer Grey, Eleanor Bergstein and Kenny Ortega. There are two “The Life” and “Everybody Dance” presented in “Multi-Angle Dance Sequences” with four different angles. There are Screen Test Montage with Patrick Swayze and Jennifer Grey and also Screen Test Comparisons with Jennifer Gray. There are eleven deleted scenes adding up to about twelve minutes.  There are three alternate scenes and also seven extended scenes. There is also a short outtakes, running only about 30 seconds.  Worth checking out if you love this film but most likely you would have see on past releases.  Easily my favorite feature is the music videos for this including “Hungry Eyes”, “She’s Like the Wind”, and “The Time of my Life”. Lastly there is a photo gallery, a fan reel,  theatrical trailer and full-feature trivia track.

The special features on “Dirty Dancing: Havana Nights” don’t compare to the first film’s but is not bare either.  There is a decent commentary track from producer Sarah Green and choreographer JoAnn Jansen. We are giving the option for multi-angle on a few dance sequences.  There are a few deleted scenes included.  There are featurettes, the first “Inside Dirty Dancing: Havana Nights” including interviews with cast/crew.  The other featurette, “Baila! A Dance Piece” is a split-screen view of the rehearsals to the final scene. There is a music video for Yerba Buena’s “Guajira”.  Lastly there is Facebook credits included for the “Dirty Dancing Facebook Game”.