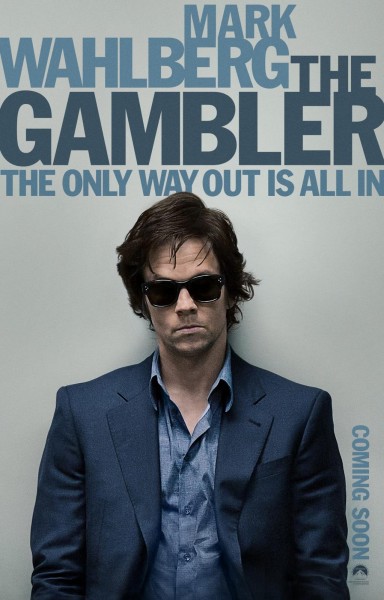 Released in 2014, The Gambler is a contemporary remake released forty years after the original movie of the same name. While it has received no little praise for telling a difficult story with care and compassion, the critical consensus is that it doesn’t quite stand up to the original in terms of sheer tension. Ultimately and despite high expectations – it was even intended to be in with a shot of making an Academy Award nomination – The Gambler didn’t stand up to audience sensibilities, but should still be worth a watch for anyone interested in themes of high stakes betting.

Games & Gambling Themes Featured
The Gambler is all about the world of illegal and unlicensed back-room betting, featuring a string of unsavory characters such as loan sharks and straight down the line gangsters. There’s no room for nice and sanitary games here, indeed the very last thing on the lead protagonist’s mind (Mark Wahlberg) is trying to find a nice little Spielautomaten online casino bonus. For him, gambling is literally an all or nothing endeavor without any room for cashing in and checking out. While poker and blackjack make occasional appearances, roulette is at the center of the movie’s gambling scenes – especially the live or die spins towards the end.

The Plot
Wahlberg plays a Jim Bennett – a professor of literature at a local university – who by night leads a very different life as a high stakes amateur gambler. It becomes apparent from very early on that Bennett doesn’t gamble for pleasure, or seemingly even to win – he gambles simply out of sheer compulsion, even when he ends up needing to pawn family heirlooms to bankroll his next bets.

Much of the movie has this as a central theme, with Bennett struggling to find funds to continue gambling so he can eventually pay off the hundreds of thousands he owes to various loan sharks – one of which Frank (played superbly by John Goodman) is a long term cohort who continues to lend Bennett money despite his better judgement.

As the movie continues Bennett faces the moral conundrum of whether to exploit his relationships with one of his students by coercing them into fixing a basketball game, and here the story takes a course of redemption and ‘last chance saloon’ as he ends up facing the final spin of the wheel.

The Cast
As mentioned John Goodman performs very well in support of Wahlberg, who turns in a strong performance of a man running out of options and without much of a clue how to extract himself from the mess he’s found himself in. Brie Larsen also makes a typically confident performance in support as a student struggling to understand her confused feelings of pity for Bennett, while also remarking at how composed he often seems to be as he follows the course of self destruction.

Conclusion
The Gambler is unlikely the be kind of movie that many people are going to feel especially inclined to watch more than once, but for what it is it presents an awkward and remarkable story well without ever quite managing to reach the heights that may have been expected, especially considering the quality of the lead roles.

Calling all motorcycle lovers!! The American International Motorcycle Expo is coming October 16-19, 2014 to the Orange County Convention Center in Orlando, FL. Media Mikes is excited to giveaway two tickets to the show to our readers. since this is aimed at people that love motorcycle, if you would like to enter for your chance to win one of this prize, please leave us a comment below or send us an email with your favorite type of motorcycle! This giveaway will remain open until October 10th at Noon, Eastern Time. This is open to all of our Media Mikes readers worldwide. One entry per person, per household. All other entries will be considered invalid. Media Mikes will randomly select winners. Winners will be alerted via email.

About American International Motorcycle Expo
The American International Motorcycle Expo’s (www.aimexpousa.com) purpose is to serve as the catalyst to bring together industry, press, dealers and consumers in a single arena that creates a grand stage for motorcycling and powersports in the U.S. and North America, and delivers an efficient and energetic market-timed expo platform for B2B and B2C in the motorcycle industry. AIMExpo is the single most important event of its type in the North American market and will have international impact within the motorcycling and greater powersports community. AIMExpo is produced by Marketplace Events Motorcycle Group, a division of Marketplace Events. (www.marketplaceevents.com)