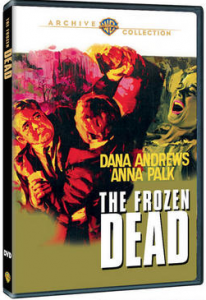 When I read the premise for “The Frozen Dead”, I thought “a sci-fi horror film about frozen Nazi soldiers…how could it go wrong?”. Too bad the film really doesn’t deliver much beyond that premise. The film drags quite a bit throughout, especially in the middle.  The visual effects are not too bad for 1966 and does take you back a little to that golden age but I just wasn’t really feeling it.

Official Premise: Dana Andrews stars in the ghoulish, sci-fi horror story The Frozen Dead. Twenty years after World War II has ended, members of the Nazi party remain, and they are determined to again rise to power. Having funded German doctor Rupert Norberg’s (Andrews) cryogenic experiments since the war, the party makes it clear that they expect him to reanimate some 1,500 frozen Nazis! Fearful for his life, Norberg continues his research – in increasingly horrific, murderous ways. But when his niece’s (Anna Palk) best friend goes missing, the young woman tries desperately to enlist help from an American scientist (Philip Gilbert) to stop the madness. Andrews took many jobs to pay the bills while trying to make it “big.” His boss at a Van Nuys gas station was so impressed with the actor’s determination that he paid for his acting and singing lessons.

“The Frozen Dead” is being released on made-to-order DVD, courtesy of Warner Archive. It is presented with an aspect ratio of 1.66:1. The transfer looks amazing for a film that is nearly 50 years old. The Dolby Digital track also works well with the score, but there isn’t much added suspense. I would recommend this release only for long-time fans of the film.